The universe is a bizarre place. It’s full of mysterious alien planets, stars that dwarf the Sun, black holes of unfathomable power, and many other cosmic curiosities that seem to defy logic. Below, we uphold some of those countless unusual space facts about our own planet and the vast universe beyond. 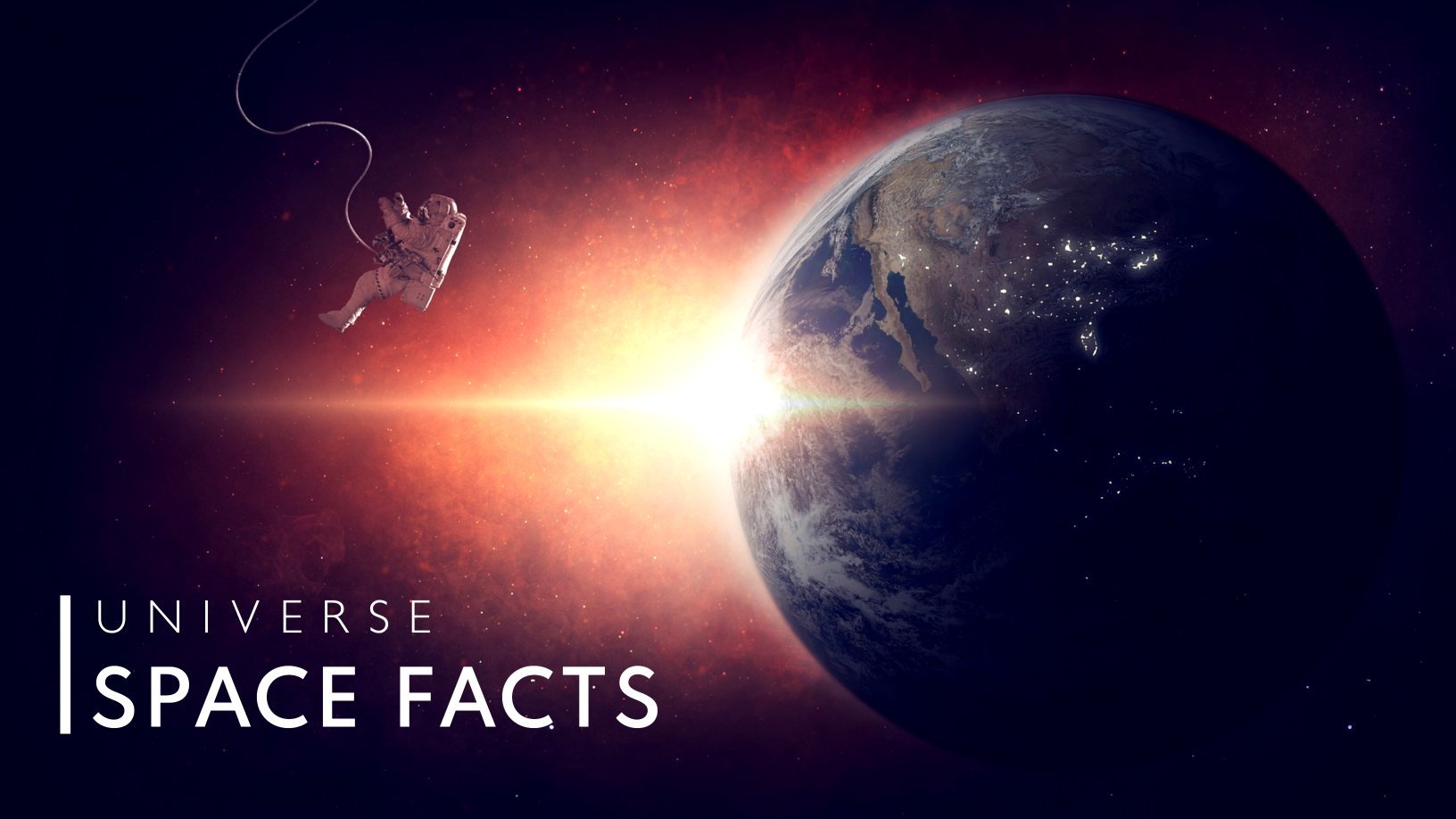 33 light-years away there is a mysterious exoplanet named Gliese 436 b, which is completely covered in burning ice. Gliese 436 b is a  Neptune-sized planet that orbits a red dwarf known as Gliese 436, a star that is cooler, smaller, and less luminous than the Sun.

Jupiter’s moon Ganymede has 30 times more water than the total amount of water on Earth. Ganymede is the largest and most massive of the Solar System’s moons and the ninth-largest object in our Solar System.

Asteroid 433 Eros has 10,000 to 1,00,000 times more gold and platinum than the total gold that has been mined from Earth. This is the second-largest near-Earth object with a mean diameter of approximately 16.8 kilometres.

Around 1.1 to 0.9 billion years ago, the entire Earth was frozen like a snowball and all continents had merged to form a single supercontinent named Rodinia. It broke up 750 to 633 million years ago.

6 | Footprints On The Moon

If you step on the Moon, your footsteps will remain there forever. The Moon has no atmosphere, which means there is no wind to erode the surface and no water to wash the footprints away.

Saturn’s moon Titan has 300 times more liquid fuel than the total known oil reserves on Earth. Titan is the largest moon of Saturn and the second-largest natural satellite in the Solar System. It is the only moon known to have a dense atmosphere, and the only known body in space, other than Earth, where clear evidence of stable bodies of surface liquid has been found.

There is a theory called the donut theory that says if you keep going in a straight line in space u will end up at the position where u started. According to it, the universe is a torus.

55 Cancri E has a radius twice Earth’s, and about 8 times the mass of Earth. About one-third of the mass of the planet is made up of diamond. It’s 40 light-years away but visible to the naked eye in the constellation of Cancer.

We think of space as a void, pitch-dark, dead silent, and devoid of air ― a place like that couldn’t possibly have a smell. But space actually does have a distinct odour. A lot of astronauts have said that space smells like a mixture of welding fumes, hot metal, raspberries and seared steak!

A Russian Cockroach named Hope (Nadezhda) gave birth to 33 baby cockroaches who were conceived during her 12-day space trip on the Foton-M bio-satellite. In further study, the researchers found that those 33 baby cockroaches are tougher, stronger, faster and quicker than cockroaches on Earth.

If two pieces of metal touch in space, they’ll bond permanently. This happens because the oxygen in our atmosphere forms a thin layer of oxidized metal on every exposed surface. This acts as a barrier that conveniently prevents metal from sticking to other chunks of metal. But since there is no oxygen in space, they stick to each other and this process is called Cold Welding.

Sagittarius B2 is a humongous molecular cloud of gas which is around 390 light-years away from the centre of Milky Way. What makes this weird is the smell of it. It smells like rums and raspberries ― because of the presence of Ethyl Formate in it. And there is literally billion litres of it!

There is a boundary that separates the black hole from the rest of the universe, it’s called the Event Horizon. In general terms, it is the point of no return. When you reach or pass Event Horizon, even light cannot escape it. The light if present inside the boundary of Event Horizon can never reach the observer outside the Event Horizon.

There is an unidentified and mysterious satellite spotted orbiting earth. Scientists have named it the “Black Knight Satellite” and it has been sending some strange radio signals since the 1930s, long before NASA or the Soviet Union sent any satellite into space.

150 light-years away from Earth, there’s a planet named HD 188753 Ab ― first detected by astronomer Maciej Konacki ― that is the only known planet to orbit a triple star system. This means that anything on this planet will experience 3 different sunsets, 3 shadows and multiple eclipses. These kinds of planets are super rare, because having a stable orbit in such a complex gravitational system is very hard.

The coldest known natural place in the universe is the Boomerang Nebula. At -272.15°C, it is 1°C warmer than absolute zero, and 2°C colder than background radiation from the Big Bang.

Scientists have revealed that an incredibly large amount of life exists in our planet’s deep subsurface. After following a ten-year study, examining samples retrieved from mines and boreholes up to 3 miles beneath the earth surface, an international team of researchers found that this remarkable ‘deep biosphere’ contains up to 23 billion tons of living organisms that’s the carbon equivalent of up to 385 times the entire human population of the Earth. It also suggests that similar life forms might exist beneath the surface of other worlds such as Mars.

The Milky Way, Andromeda, and all the nearby galaxies are being pulled into something that we can’t see that is tens of thousands of times more massive than our galaxy, called “The Great Attractor.”

A white dwarf star named “Lucy”, or officially known as BPM 37093, holds in its heart the brightest and the largest diamond ever found, which weighs about 10 billion trillion trillion carats! It’s just 473036523629040 kilometres away.

Russian cosmonaut Sergei Krikalev is the world’s time travel record holder. He has spent more time in orbit around the earth than
anyone – 803 days, 9 hours and 39 minutes. Due to its effects of time dilation, he has actually lived for 0.02 seconds less than everyone else on Earth — effectively, he’s travelled 0.02 seconds into his own future.

The Big Bang didn’t just result in our familiar universe, according to a mind-bending new theory, it also generated a second anti-universe that extended backwards in time, like a mirror image of our own. In the anti-universe before the Big Bang, it suggests that the time ran backwards and the cosmos were made of antimatter instead of matter. It was proposed by a trio of Canadian physicists who believe that it could explain the existence of dark matter.

There is a water reservoir floating in space around an ancient distant quasar, holding 140 trillion times the mass of water in the Earth’s oceans. This is the largest known body of water.

26 | Once Purple Was Replaced By Green

In the International Journal of Astrobiology, a new research paper suggests that the first life on Earth might have had a lavender hue or purple pigments to harvest energy. Before green plants started harnessing the power of the Sun for energy, these tiny extraterrestrial purple organisms figured out a way to do the same.

Saturn is less dense than water so it would float if you put it in enough water, and its visible rings are actually made of ice, dust, and rock.

Gravity does some weird things to the universe. The power of gravity bends light, which means that the objects astronomers are looking at might not actually be where they appear to be. Scientists call this bizarreness gravitational lensing.

Astronomers have known for nearly a century that the universe is expanding, and has been since the moment it exploded into existence in the Big Bang. Everywhere in the universe, galaxies, including our own, are moving away from each other. In fact, every hour the Universe expands by a billion miles in all directions!

Atoms consist of 99.99999999% empty space. That means the computer you’re looking at, the chair you’re sitting on, and you, yourself are mostly not there.

On 15th August 1977, we received a radio signal from deep space that lasted 72 seconds. We still don’t know how or where it came from. The signal is known as “The Wow!” signal.

Our Milky Way is home to the darkest planet ever discovered, TrES-2b ― the coal-black alien planet which absorbs almost 100% of the light that falls on it.

The Sun may be older than the Earth, but the water we drink is older than the Sun. It’s a mystery how the world became awash in it. But one prevailing theory says that water originated on our planet from ice specks floating in a cosmic cloud before our Sun was set ablaze, more than 4.6 billion years ago.

Venus is the only planet in our Solar system to rotate clockwise. It rotates in retrograde rotation once every 243 Earth days ― the slowest rotation of any planet. Because its rotation is so slow, Venus is very close to spherical.

The largest known black hole (Holmberg 15A) has a diameter of 1 trillion kilometres, more than 190 times the distance from the Sun to Pluto.

Easter Island Mystery: The Origin Of The Rapa Nui People