If ancient astronaut did land here what effect they have had on earth man. Perhaps they were worshiped, feared, loved or perhaps they brought gates of unknown knowledge, were simply principle reliever. If we accept the premise that beings from another civilization visited here ages ago, then some of the mysteries of our past take a new and startling light.

‌There are places on this planet where lives exist all most unchanged and antiquity. Nearly seven decades ago, machines descended from the skies to land on the remote regions of the South Pacific. The primitive inhabitants were puzzled and frightened about the invasions. The visitors were light skin creatures who did not hunt a fish, yet never liked foods. They came from heaven, they had to be Gods. They were, in fact, American servicemen sent in strategic Airfields and Military installation, during the Second World War.

When the war was over, they went home back into the skies. The natives began making straw and bamboo chassis, resembling aeroplanes. For decades, they scanned the heaven day and night, watching and waiting for their return. It depicts the scene of an encounter between the primitive people and visitors from the highly developed technically superior world.

All men were one time primitive. Is it possible to imagine that our own ancestors may have reacted the same way to visitors from outer space? The world is a storehouse and archive of unexplained phenomena, gigantic creations, strange historical relics and arts. In this article, we will talk about some of these historical arts that really convey something odd that happened on Earth in the distant past. 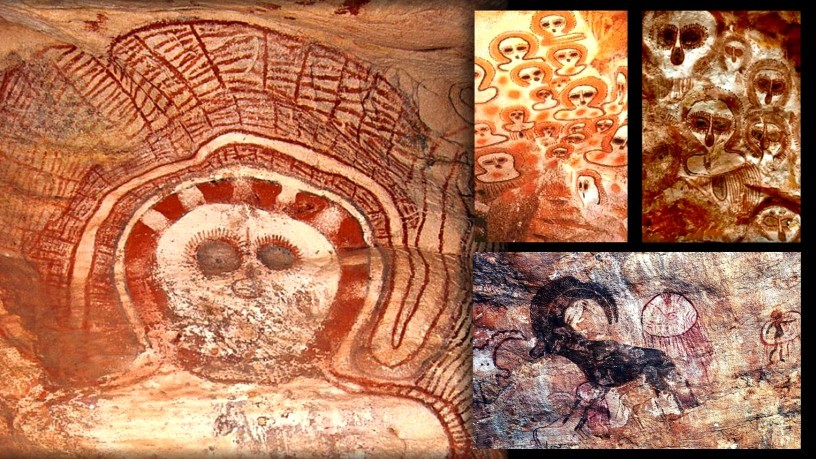 1 | Painting In The Cave Of Pech Merle, France

The drawings in the cave of Pech Merle near Le Cabrerets in France depict a field of different wild animals, amidst which there is a strange-looking humanoid structure that has limbs and a tail as well. There is no reason to believe that this figure was imaginative as all the other animals seen in the drawing can be recognized. Three flying objects are also seen in this drawing that was drawn about 17000 to 19000 years ago.

What looks exactly an outline diagram of a spaceship as seen in sci-fi movies is actually a cave drawing that is found in the Niaux caves of France. This Paleolithic cave painting was drawn some time between 13,000 BCE and 10,000 BCE.

There is one drawing of many in Val Camonica that shows human or humanoid figures with what look like halos around their entire heads. There are lines that may represent light coming out from these circles. Apart from this, there are many other rock drawings estimated to dating back some time around 10,000 BCE. They also rather resemble men in spacesuits or old-school scuba gear. Either would be rather strange. Proponents of the ancient alien theories say these are early depictions of alien visits.

The Sego Canyon petroglyphs in Thompson, Utah are the perfect example of ancient rock arts. The site has art from at least three native cultures spanning nearly 8,000 years. Some of these pieces are clearly of buffalo, horses and white men. Others are a bit more bug-eyed and oddly shaped. These are what many believe are drawings of ancient aliens. Some of these strange drawings have been dated to 6000 BCE.

These figures also do not look humans. In the first picture, notice the same halo-looking object around the head that we see in some of the other paintings from other parts of the world. These cave paintings are from Tassili, the Sahara Desert in North Africa. These two paintings date back to 6000 BCE and 7000 BCE respectively.

The Wandjina Rock Art in Australia is the best example of ancient aliens in art on the continent. These cave paintings date back to approximately 3,800 BCE. There are certainly some big-eyed, oddly shaped humanoids in these works of art. These were important paintings to Aboriginals, who freshened the paint so often that some areas have dozens of layers of paint. These are some of the most ancient paintings in Australia of what the local Aborigines call the Wandjina, the spirit of weather. The question is whether these paintings depict aliens.

7 | The Helicopter Hieroglyphs, Temple Of Seti I, Egypt

The magnificent great Pyramids of Giza are popular fodder for conspiracy theories and the whole of the ancient Egyptian civilization has in one way or another been linked to bizarre alien conspiracies. But one of the most convincing bits of evidence aliens has, in fact, helped raise the ancient civilization is a set of unusual hieroglyphs in the 3,000-year-old Temple of Seti in Abydos, Egypt.

Among conspiracy forums, the icons have become known as the “Helicopter Hieroglyphs” for supposedly showing eerie pictures of what appears to be a helicopter and futuristic aircraft. The mainstream archaeologists say the icons are the simple result of typographical errors. However, many have claimed they were left behind by time travellers while the Ancient Astronaut Theorists suggested they were left behind to honour alien visitors.

Ancient Mayan artwork is known for its intricately detailed, weaving and geometric designs and the sarcophagus lid of the Mayan king Pacal, which was made in the 7th century AD, is a testament to the Mayan’s prowess. However the 1968 book Chariots of the Gods, by Erich von Däniken, has pointed out that far from being an extremely lavish coffin, the sarcophagus contains references to alien UFOs.

According to Mr von Däniken, the central figure in the middle of the sarcophagus is an extraterrestrial alien riding what appears to be a rocket or some sort of space ship control centre. He wrote: “In the center of that frame is a man sitting, bending forward. He has a mask on his nose, he uses his two hands to manipulate some controls, and the heel of his left foot is on a kind of pedal with different adjustments. The rear portion is separated from him; he is sitting on a complicated chair, and outside of this whole frame, you see a little flame like an exhaust.”

The so-called Saqqara Bird is a sycamore carving of a bird of no known species. It could be a toy, a ceremonial object or even a weather vane, according to theories. Now, the ancient alien theory surrounding this bird from 220 BCE is two-fold. Firstly, some believe the carving is representative of ancient aviation technology. Take that one step further and aliens are the ones who offered that technology to humans. Is this possible?

These ancient Egyptian, as well as Pre-Colombian small models look more like a flying craft or airplanes than a bird or a fish. In every model, the aspect ratios of wings, fuselage, tail, etc. are so perfect that engineers have been able to create its similar models in larger versions and fly it into the sky. However, lighter than air flight wasn’t accomplished until the 1780s. So, how did ancient civilizations know enough about flying to make models and sketches of flying machines?

The riddle of Flight 19: They vanished without a trace

The mummified 'giant finger' of Egypt: Did giants really once roam on Earth?