The Tamám Shud case, also known as the Mystery of the Somerton Man, is an unsolved case of an unidentified man found dead at 6:30 am, December 1st of 1948, on the Somerton Park beach, just south of Adelaide, South Australia. The case is named after the Persian phrase tamám shud, meaning “ended” or “finished,” which was printed on a scrap of paper found months later in the fob pocket of the man’s trousers. 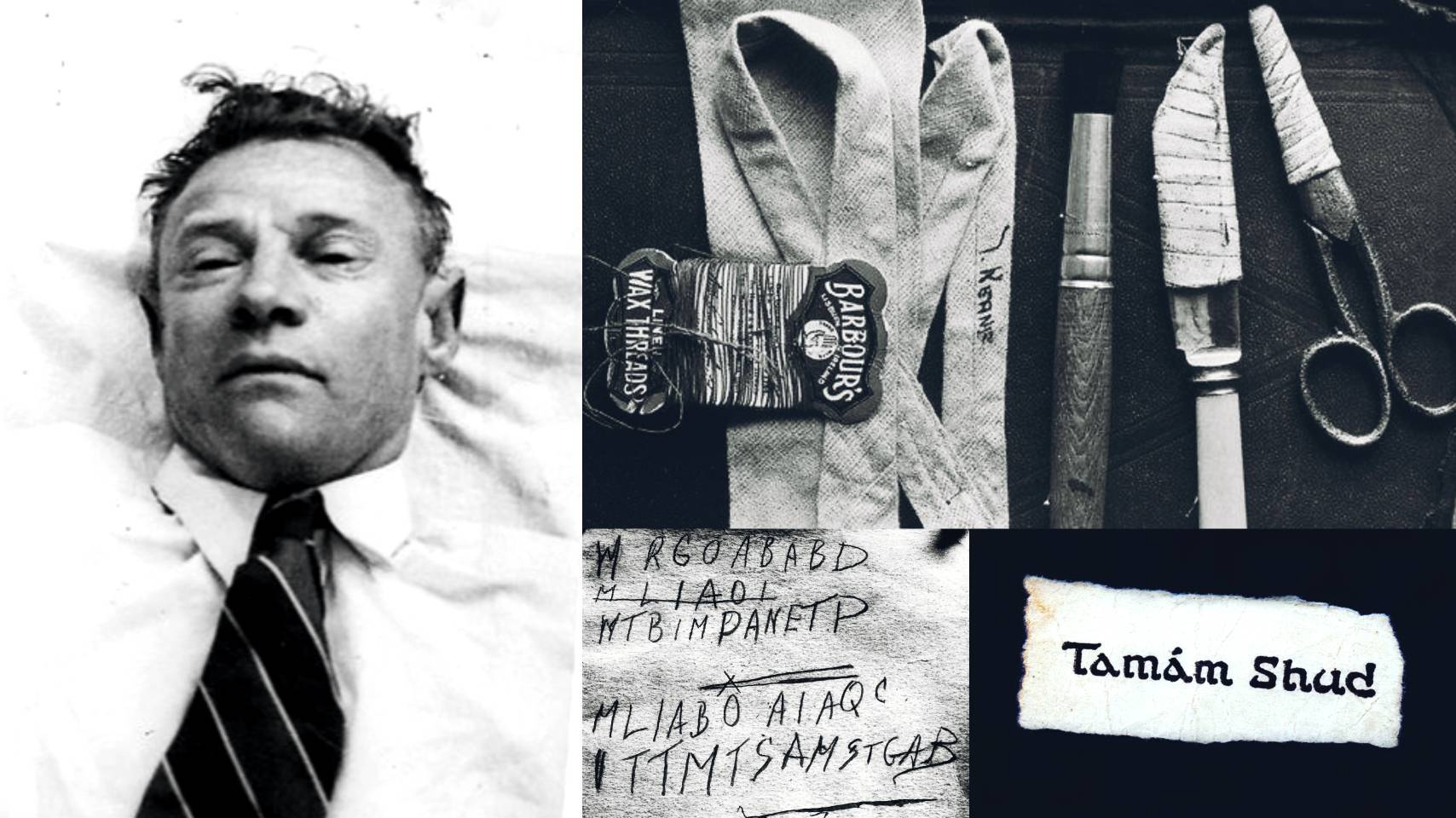 “Tamám Shud,” read the scrap of paper torn from a rare book of 12th-century Persian poetry. However, the word “Tamám” has been misspelt as “Tamán” in many early reports so the case has also gained its popularity as the “Tamán Shud” case.

The words—translated to “it is finished”—didn’t offer Australian investigators much clarity, but that’s about all they had to go on when they came upon the man’s body at Somerton beach.

Soon after, in a car parked near the beach, they found the book that the paper was torn from―and inside, a local phone number, another unidentified number and a handwritten text that resembled an encrypted message. The cipher has not been deciphered or interpreted in a way that satisfies authorities on the case.

The phone number belonged to Jessica Thompson, a nurse in Somerton who said she’d never seen the mysterious man before. However, neighbours said otherwise, claiming the man knocked on Thompson’s door the day before his body was found.

A Suitcase At The Adelaide Railway Station:

On January 14th of 1949, staff at the Adelaide railway station discovered a brown suitcase with its label removed, which had been checked into the station cloakroom after 11:00 a.m. on 30 November 1948. It was believed that the suitcase was owned by the man found on the Somerton Park beach.

Police recovered various clothes, shoes, slippers, shaving items, knives and other daily use things but all identification marks on the clothes had been removed. However, police found the name “T. Keane” on a tie, “Keane” on a laundry bag and “Kean” (without the last e) on a singlet. Police believed that whoever removed the clothing tags either overlooked these three items or purposely left the “Keane” tags on the clothes, knowing Keane was not the dead man’s name. What was unusual was that there were no spare socks found in the case.

The Tamám Shud Case – One Of Australia’s Most Profound Mysteries:

The investigation team gave their best efforts to line up all the details of the “Tamám Shud” case and solve its enigma, but they were never able to do that.

The Tamám Shud case has been considered, since the early stages of the police investigation, “one of Australia’s most profound mysteries.” There has been intense speculation ever since regarding the identity of the victim, the cause of his death and the events leading up to it.

Public interest in the case remains significant for several reasons: The death occurred at a time of heightened international tensions following the beginning of the Cold War. The apparent involvement of a secret code. The possible use of an undetectable poison. And the inability of authorities to identify the dead man.

Was The Somerton Man A Soviet Spy?

It wasn’t until Thompson passed away that her daughter came forward, claiming her mother was a former Soviet spy who had an affair with the mysterious man. Did Jessica Thompson have anything to do with the man’s death? We’ll likely never know: government officials refused to exhume the body for DNA testing, and his autopsy revealed nothing conclusive.

In recent years new evidence has emerged, including an old identification card possibly identifying the Somerton Man as one H. C. Reynolds. The ID card, numbered 58757, was issued in the United States on 28 February 1918 to H.C. Reynolds, giving his nationality as “British” and age as 18. Further researches have failed to find any records relating to H.C. Reynolds.

The South Australia Police Major Crime Branch, who still have the case listed as open, are investigating the new information. However, some independent researchers believe the ID card belonged to one Horace Charles Reynolds, a Tasmanian man who died in 1953 and therefore could not have been the Somerton Man.

The South Australian Police Historical Society holds the plaster cast of the Somerton Man’s head and chest taken by the police in 1949. It contains strands of the man’s hair. Any further attempts to identify the body have been hampered by the embalming formaldehyde having destroyed much of the man’s DNA.

Other key evidence no longer exists, such as the brown suitcase, which was destroyed in 1986. In addition, witness statements have disappeared from the police file over the years.

The lack of success in determining the identity and cause of death of the Somerton Man had led authorities to call it an “unparalleled mystery” and believe that the cause of death might never be known.