Rudolf Christian Karl Diesel, a German inventor and mechanical engineer, whose name is famous for invention of the engine that bears his name, as well as for his controversial death under mysterious circumstances. In 1942, a film titled “Diesel” was made based on his life story. 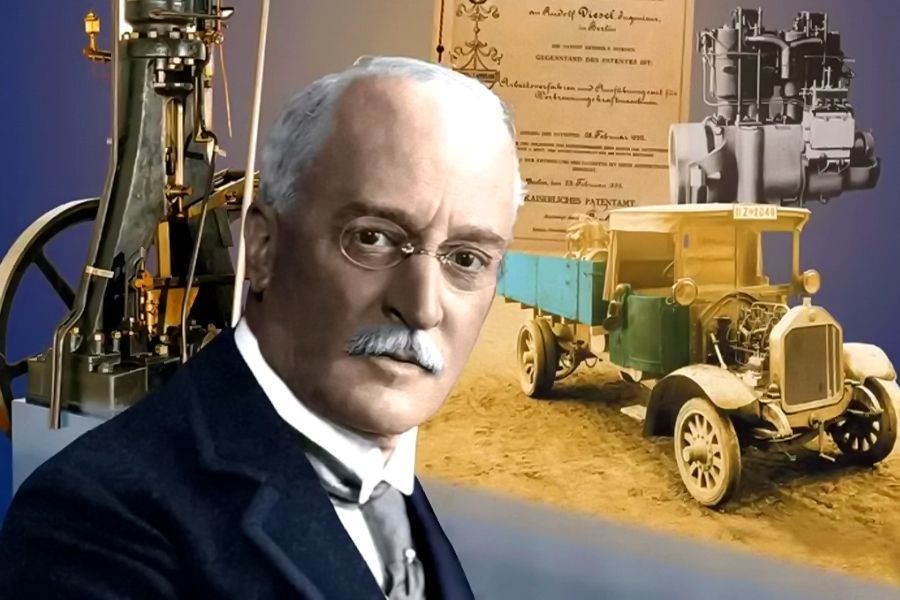 Diesel was born in the house Rue Notre Dame de Nazareth No. 38 in Paris, France in 1858 the second of three children of Elise (née Strobel) and Theodor Diesel. Theodor Diesel was a reputed leather goods manufacturer in Paris. But later, Diesel Family suffered from financial difficulties, thus young Rudolf Diesel had to work in his father’s workshop and deliver leather goods to customers using a barrow. Even in such a hard time, little Diesel was known in his school as a bright and meritorious student.

In 1870, as the Franco-Prussian War outbroke, the Diesel family was forced to leave, as were many other Germans, because Theodore Diesel was also a German who had come to Paris from the town of Augsburg, Bavaria, in 1848. After that, they settled in London, England, where Diesel attended an English school.

Before the war’s end, however, Diesel’s mother sent 12-year-old Rudolf to Augsburg to live with his aunt and uncle, Barbara and Christoph Barnickel. At the age of 14, Diesel wrote a letter to his parents saying that he wanted to become an engineer, and he really did so.

The Diesel Engine – An Unforgettable Invention Of Rudolf Diesel:

At the beginning of his career, Diesel was working with the design and construction of a modern refrigeration and ice plant, but later in the early 1890s, he expanded beyond the field of refrigeration. He first worked with steam, his research into thermal efficiency and fuel efficiency leading him to build a steam engine using ammonia vapour. During tests, however, the engine exploded and almost killed him. He spent many months in a hospital, followed by health and eyesight problems.

Later, Diesel had been working on “a Rational Heat-engine to Replace the Steam Engine and The Combustion Engines” of that time. And that’s how the first successful Diesel engine ran in 1897. It’s now on display at the German Technical Museum in Munich.

Though Rudolf Diesel obtained patents for his design in Germany and other countries, including the United States, he never saw his so much success in his invention as we can see today, because he died in 1913 unexpectedly. It was the time when the use of Diesel engines just began to hike world wide.

Disappearance And Death Of Rudolf Diesel:

On the evening of September 29, 1913, Rudolf Diesel disappears from the steamship Dresden while travelling from Antwerp, Belgium to Harwich, England. Diesel boarded the post office steamer in Antwerp on his way to a meeting of the Consolidated Diesel Manufacturing company in London.

He took dinner on board the ship and then went to his cabin around 10 PM, leaving word to be called the next morning at 6:15 AM. But unfortunately, he was never seen alive again. The next morning his cabin was empty and his bed had not been slept in, although his nightshirt was neatly laid out and his watch had been left where it could be seen from the bed. His hat and overcoat were discovered neatly folded beneath the afterdeck railing.

READ:  Toumaï: Our Earliest Relative Who Left Questions To Us Around 7 Million Years Ago!

Ten days later, the crew of the Dutch boat Coertsen came upon the corpse of a man floating in the North Sea near Norway. The body was in such an advanced state of decomposition that it was unrecognizable, and they did not bring it aboard. Instead, the crew retrieved personal items like pill case, wallet, ID card, pocketknife, eyeglass case and etc. from the clothing of the dead man, and returned the body to the sea. On 13th October, these items were identified by Rudolf’s son, Eugen Diesel, as belonging to his father. On 11th October it was reported that Diesel’s body was found at the mouth of the Scheldt by a boatman but he was forced to throw it overboard because of heavy weather.

There are various theories to explain Diesel’s death. Certain people, such as his biographer Grosser in 1978, argue that Rudolf Diesel committed suicide. Another line of thought suggests that he was murdered, given his refusal of granting the German forces the exclusive rights to using his invention. Yet, evidence is limited for all explanations, and his disappearance and death remain unsolved.

Shortly after Diesel’s disappearance, his wife Martha opened a bag that Diesel had given to her just before his ill-fated voyage, with a mandate that it should not be opened until the following week. She discovered 200,000 German marks in cash―USD 1.2 million as of today―and a number of financial statements indicating that their bank accounts were virtually empty.

In a diary, that Diesel brought with him on the ship, for the date 29 September 1913, a cross was drawn, indicating death. This, however, does not solve the question whether he ended his life by his own hand, or whether he fell victim to a crime.

By 1912, there were more than 70,000 diesel engines working around the world, mostly in factories and generators. Eventually, Diesel’s engine would revolutionize the railroad industry. After World War II, trucks and buses also started using diesel-type engines that enabled them to carry heavy loads much more economically.

In this time, Diesel’s disappearance threw the world for a loop. He appeared extremely well-off thanks to his many patents and was a titan of invention. However, after his disappearance and the ruling of his death, new details revealed that he was actually in serious debt due to bad investments and was stricken by bad health. While his death was officially ruled a suicide, the mysterious circumstances around it kept Diesel in the news for years.

At the time of Diesel’s death, he was on his way to England to attend the groundbreaking of a new diesel-engine plant—and to meet with the British navy about installing his engine on their submarines. Conspiracy theories began to fly almost immediately: “Inventor Thrown Into the Sea to Stop Sale of Patents to British Government,” read one headline. Another worried that Diesel was “Murdered by Agents from Big Oil Trusts.” It is likely that Diesel did throw himself overboard—as it turns out, he was nearly broke—but the mystery will probably never be solved.