The story of Kap Dwa, which literally means “two heads,” appears in British records in the early 20th century, as well as various voyage records between the 17th and 19th centuries. The legend says that Kap Dwa was a two-headed Patagonian giant, with a height of 12 feet or 3.66 meters, who once lived in the jungles of Argentina, South America. 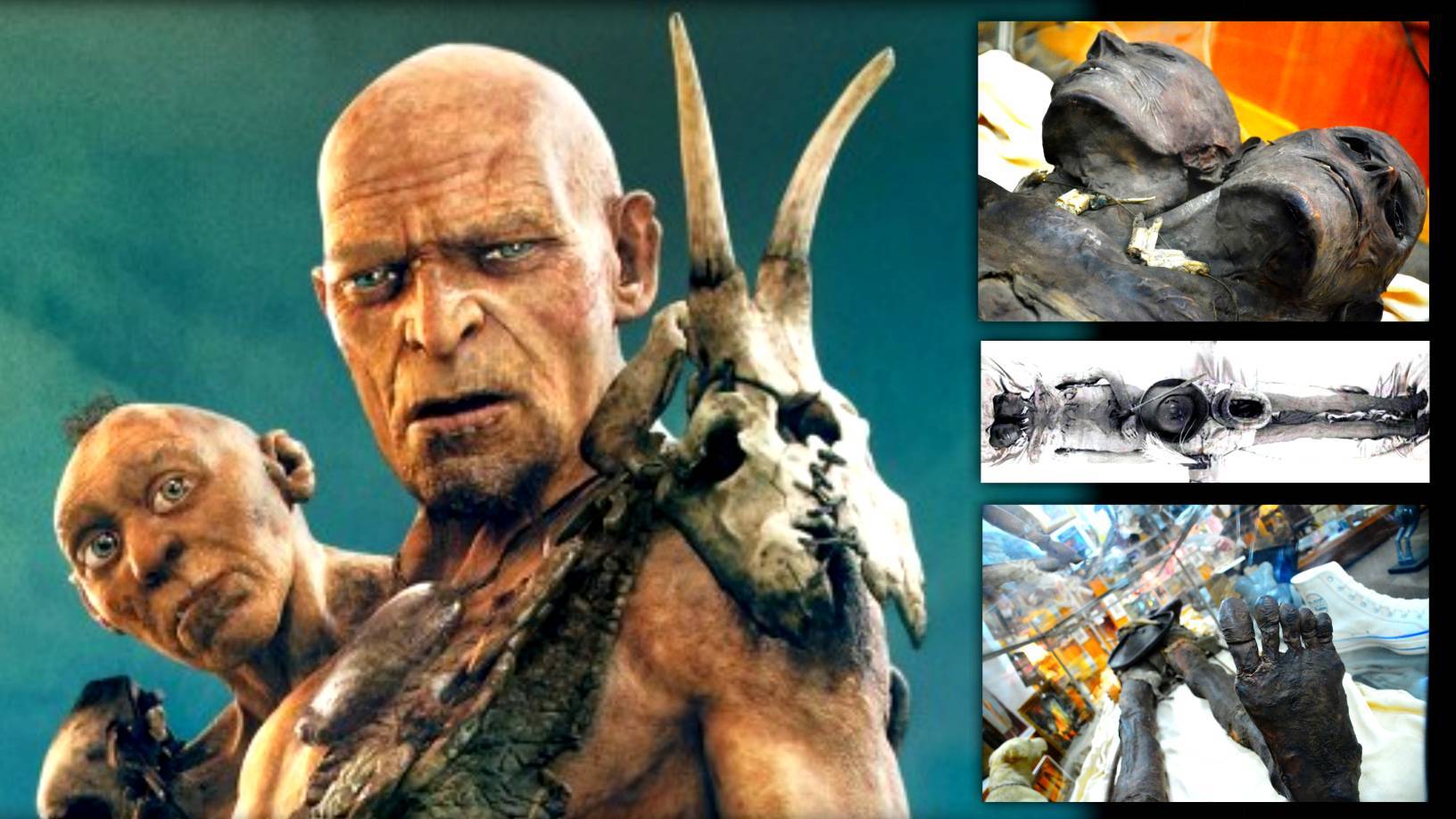 The creature’s legend begins in 1673, where the giant of over 12 feet with two heads, was captured by Spanish sailors and set captive on their ship. The Spaniards lashed him to the mainmast, but he broke free (being a giant) and during the ensuing battle suffered a fatal injury. They pierced his heart with a spear until his death. But before that, the giant had already claimed four Spanish soldiers’ lives.

Then what happened to Kap Dwa isn’t exactly clear, but his naturally mummified body was said to bring to be displayed in various places and sideshows. In 1900, the mummy of Kap Dwa entered the Edwardian Horror Circuit and over the years was passed from showman to showman, eventually ending up at Weston’s Birnbeck Pier in 1914.

After spending the next 45 years on display in North Somerset, England, old Kap Dwa was purchased by one “Lord” Thomas Howard in 1959, and following a few more hand-offs he ultimately ended up in Baltimore, MD, of all places. He now rests in the bizarre collection of oddities that is Bob’s Side Show at The Antique Man Ltd in Baltimore, owned by Robert Gerber and his wife. The mummified remains of Kap-Dwa are believed to be a fabricated hoax, although it is still a mystery.

The Patagones or Patagonian giants were a race of giant humans rumoured to be living in Patagonia and described in early European accounts. They were said to have exceeded at least double normal human height, with some accounts giving heights of 12 to 15 feet (3.7 to 4.6 m) or more. Tales of these people would take a hold over European concepts of the region for some 250 years.

The first mention of these people came from the voyage of a Portuguese sailor Ferdinand Magellan and his crew, who claimed to have seen them while exploring the coastline of South America en route to the Maluku Islands in their circumnavigation of the world in the 1520s. Antonio Pigafetta, one of the expedition’s few survivors and the chronicler of Magellan’s expedition, wrote in his account about their encounter with natives twice a normal person’s height:

“One day we suddenly saw a naked man of giant stature on the shore of the port, dancing, singing, and throwing dust on his head. The captain-general [i.e., Magellan] sent one of our men to the giant so that he might perform the same actions as a sign of peace. Having done that, the man led the giant to an islet where the captain-general was waiting. When the giant was in the captain-general’s and our presence he marvelled greatly, and made signs with one finger raised upward, believing that we had come from the sky. He was so tall that we reached only to his waist, and he was well proportioned…”

Later, Sebalt de Weert, a Dutch captain associated with the exploration of the coasts of South America and the Falkland Islands south of Argentina in 1600, and his several crew claimed to have seen members of a “race of giants” while there. De Weert described a particular incident when he was with his men in boats rowing to an island in the Magellan Strait. The Dutch claimed to have seen seven odd-looking boats approaching with were full of naked giants. These giants supposedly had long hair and reddish-brown skin and were aggressive towards the crew.

Kap Dwa has both supporters and detractors: there are the taxidermy truthers and there are the people that believe this to a real body. On the “real” side, several sources report no obvious evidence of taxidermy. One source claims that Johns Hopkins University students did an MRI on the body of Kap Dwa.

According to an article in  Fortean Times, Frank Adey remembers seeing it in Blackpool around 1960. “There were no signs of sutures or other ‘joins’, even though the body was largely unclothed. In the 1930s, two doctors and a radiologist reportedly inspected it in Weston and found no perceptual evidence of it being a fake.”

However, the conflicting origin stories and the status of Kap Dwa as a sideshow attraction, of course, immediately damage its credibility in some points. We believe, if it was really a giant’s mummy then it should be displayed in a reputed museum, and should be better analyzed by today’s mainstream scientists. It seems that Kap Dwa’s DNA analysis has not yet been conducted. So as long as these tests are not being done, the mummy of Kap Dwa completely remains an unsolved mystery.