In June 2016, the vacation for a young pair of tourists took a turn for the horrific when one of them fell into a boiling, acidic pool in Yellowstone National Park and “dissolved.” 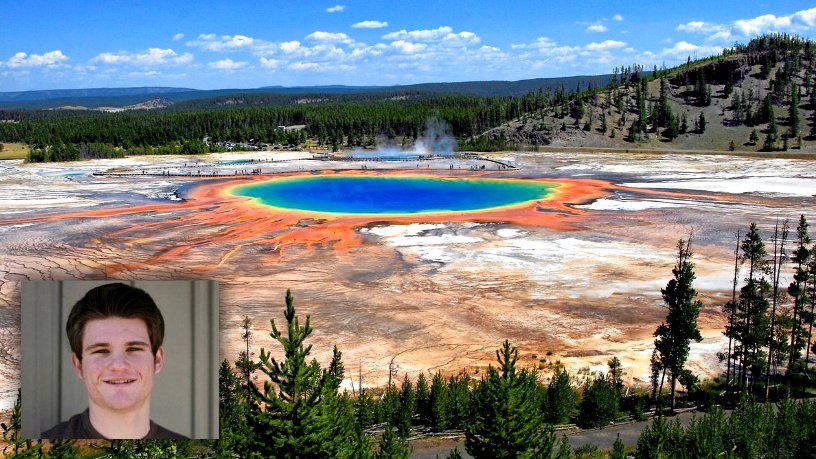 The Fate Of Colin Scott:

Colin Scott, 23, was hiking through a prohibited section of the park on 7 June with his sister, Sable. They were searching for a place to “hot pot”, the illegal practice of swimming in one of the park’s thermal features. Right then, they found a hot spring there. While Colin was leaning down to check the temperature in the hole, he slipped and fell into it.

Sable Scott was filming their adventure on her phone. The smartphone recorded the moment Colin slipped and fell into the pool and her efforts to rescue him. There’s no cellphone service at the basin, so Sable went back to a nearby museum for help.

When park officials arrived, portions of Colin Scott’s head, upper torso and hands were visible in the hot spring. A lack of movement, suspected extreme temperatures, and indications of several thermal burns, Colin was determined to be deceased. The officials said, a v-neck-style shirt was visible, and what appeared to be a cross was visible and resting on Colin’s face.

Rescuers were unable to safely recover Colin’s body, due to the “volatile” thermal area and an incoming lightning storm. When officials returned the following morning, Colin’s body was no longer visible.

The consensus among the rescue and recovery team was that the extreme heat of the hot spring, coupled with its acidic nature, dissolved the remains of Colin’s body. A wallet and a pair of flip-flops belonging to Colin were recovered.

Colin’s sister told investigators that he was visiting her from Portland, Oregon, and had recently graduated from college before coming to visit her. It was their plan to visit the Yellow Stone Park in Wyoming and experiencing a new thing in life. But things didn’t go with the plan, taking a dark turn through a way of horrendous suffering and death.

It is the hottest thermal region in the park, where temperatures can reach 237 degrees Celsius. That’s hotter than the temperature you cook most food at in an oven. Warning signs are posted around the area to direct visitors to remain on the boardwalk.

However, water temperatures at the basin normally stay within 93 degrees Celsius. At the time Colin Scott’s body was recovered, rescuers recorded a temperature of 101 degrees Celcius, at which point water begins to boil.

Most of the water in the park is alkaline, but the water in the Norris Geyser Basin, where Colin fell into, is highly acidic. This is caused by chemical-emitting hydrothermal vents under the surface. Microorganisms also break off pieces of surrounding rocks, which adds sulfuric acid to the pools. This highly acidic water bubbles to the surface, where it can burn anyone who is exposed to it.

Since 1870, at least 22 people have died from injuries related to thermal pools and geysers in the park. Significantly, one incident took place In 1981, when a 24-year-old California man named David Kirwan tried to save his friend’s dog by diving into one of Yellowstone Hot Springs that is almost always near the boiling point. He died in a bizarre way after spending a few distressful hours in a local hospital.

Though the conditions of the thermal area waters can cause fatal burns and break down human flesh and bone, microorganisms called extremophiles have evolved to live in these extreme conditions. These are what sometimes make the waters look milky or colourful.

Portland Man Fell Into An Acidic Pool In Yellowstone And Dissolved!