Nearly two decades ago, a team of explorers were working on an exploration and survey mission off the western coast of Cuba when their sonar equipment picked up a perplexing series of stone structures lying some 650 metres below the surface. 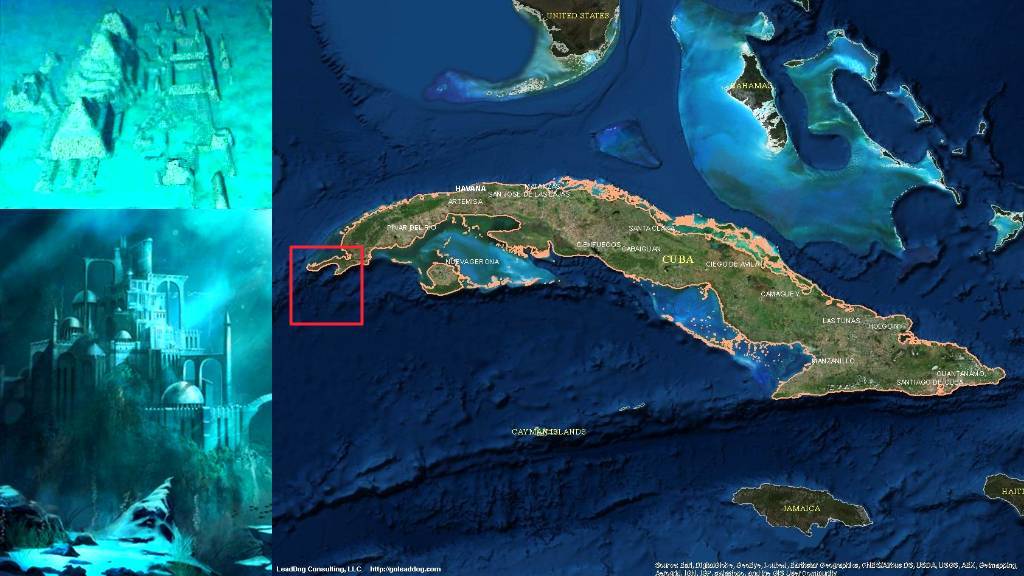 The structures appeared completely analogous against the barren ‘desert’ of the ocean floor and seemed to show symmetrically organized stones reminiscent of an urban development. Tabloids and research institutions exploded to the news of this exciting underwater discovery, indicating the “lost city of Atlantis.”

Discovery Of The Underwater City Of Cuba:

In 2001, Pauline Zalitzki, a marine engineer and her better half Paul Weinzweig found evidence of incredible manmade like structures deep within the Atlantic ocean.

Paul owned a Canadian company called Advanced Digital Communication (ADC) which was working in close association with the Cuban Government on a survey mission. It was one of the four firms probing the sea while searching for treasure-laden ships from the Spanish colonial era. The exploration was being conducted along the coast of the Guanahacabibes Peninsula in the Pinar del Río Province of Cuba.

The ADC team used advanced Sonar equipment to study the Cuban waters when they noticed strange rocks and granite structures on the seafloor. The objects were symmetrical and geometrical stone shapes unlike what you would expect to find closely resembling remnants of an urban civilization. The search covered an area of 2 square kilometres with a depth of between 2000 feet and 2460 feet.

For a closer examination, the team sent an underwater visual robot that re-recorded images of the structures in better resolution and clarity. The new pictures determined formations that were slightly pyramidal while others were circular, made of massive smooth stones which resembled hewn granite. The size of the pyramids reportedly measured approximately 8 feet by 10 feet in height and width. Some rocks were stacked upon each other while others were not and at much further distance.

It was surprising for the researchers to see that stones resembling an urban complex could be sunk so deeply into the sea. How did a massive array of stones relocate to the floor of the sea was a mystery no one would solve.

What Did The Researchers Team Find After Conducting An In-depth Investigation?

The ADC team did not want to come to any conclusions seeing how the images could have been misinterpreted. They were reluctant to agree that they could be remains of a sunken city without further investigation. Fragments of the site were sent to Manuel Iturralde, a marine geologist, who studied the pieces to conclude that the test results were very unusual.

Findings suggest that such magnificent stonework would have taken 50,000 years or more to sink to such depths of the sea. “It was beyond the capability of cultures of that time to establish such complex structures,” said Manuel Iturralde. “To explain these samples in a geological point of view is very hard” He added.

News Agencies Claimed It To Be The Lost City Of Atlantis:

Soon, news agencies reported similarities between the recent discovery and the lost city of Atlantis. However, the ADC team trashed any such speculation and stated the discovery cannot be compared. “The story is a myth,” said Zalitzki, “What we have found are most likely the remnants of local culture.”

Researchers were quick to share local legends of Maya and the native Yucatecos who describe a settlement inhabited by their ancestors. Their entire island was washed away by the waves of the sea. Iturralde was not ready to accept any theories which connect the discovery to lost civilizations.

Iturralde mentioned that the rock formations could be miraculous creations of Mother Nature and nothing more. A specialist in underwater archaeology at Florida State University added “It would be cool if they were right, but it would be real advanced for anything we would see in the New World for that time frame. The structures are out of time and out of place.”

Is The Underwater City Of Cuba A Myth?

Lead author of the research, Professor Julian Andrews, from the University of East Anglia’s School of Environmental Sciences, told CNN: “The suggestion that they were archaeological remains was brought about by tourists who were swimming around and saw these things and thought they were stonework.”

Greek authorities investigated the site, however, they found no supporting evidence that this was an ancient city port that was lost to the sea. After an extensive investigation, they concluded that the underwater structures are a fossil feature from the Pliocene age, which has since been exhumed by sea currents.

Response From The Cuban Government:

The Cuban government lead by President Fidel Castro also became greatly involved in finding the truth behind the strange discovery along with the National Geographic Society and Cuba’s National Museum. A tremendous interest among the country’s citizens and the media wanted to finally connect the dots and declare the discovery to be something ancient and magnificent.

It has been almost twenty years that the discovery was made. The publicity and enthusiasm about the mysterious deep-sea city have faded from the media and tabloids. Research is now at a standstill and without additional data, it appears all answers are clouded in uncertainty. But the first sonar images of what was dubbed a lost city did create a tremendous impact on the Cuban government and its people.

The world is always fascinated by the mystery of an ancient civilization, and for a time the “Underwater City of Cuba” was one of the most unexplained and strange topics. It still lies at peace in the ocean’s depths and is as puzzling as ever.

Very similar discovery was made in 1986, off the coast of Yonaguni Island in Japan. It’s known as the “Yonaguni Monument” or the “Yonaguni Submarine Ruins” which is a prehistoric submerged rock formation formed in weird large clusters up to 5 floors high and it is highly believed to be a ‘completely man-made’ artificial structure.