Since the beginning, humans are witnessing crimes and no wonder this curse will remain with us forever. Perhaps that’s why ‘God’ and ‘Sin’ like terms were born in humanity.

Almost every crime happens in secrecy, but most of the criminals get exposed too early. However, there are some crimes that are never solved, and the case of the Lake Bodom Murders is just one such perfect example.

The Unsolved Mystery Of The Lake Bodom Murders:

The Lake Bodom Murders were a case of multiple homicides that took place in Finland in 1960. Lake Bodom is a lake by the city of Espoo, about 22 kilometres west of the country’s capital, Helsinki. In the early hours of June 5, 1960, four teenagers were camping on the shores of Lake Bodom.

Between 4 AM and 6 AM, an unknown person or people murdered three of them with a knife and blunt instrument wounding the fourth.

On June 5, 1960, three teenagers were murdered at Lake Bodom in Finland. Early in the morning of that day, four teenagers had been camping on the lake’s shores when sometime between 4:00 and 6:00 AM an unknown suspect or number of suspects attacked all four of them.

The four teenagers were attacked with a knife as well as a blunt object and while three of the four perished in this multiple homicide, one of the teens survived. The single survivor of the attacks was Nils Wilhelm Gustafsson.

Gustafsson continued on with his life until 2004 when he became the subject of the investigation into the murders. Gustafsson was charged with the murders but in October of 2005, the district court found him not guilty. Two of the three victims were just 15-year-old at the time of their death and the third one was 18-year-old as was Nils Wilhelm Gustafsson.

The three murder victims were all stabbed and bludgeoned. Gustafsson suffered a concussion, jaw and facial fractures as well as many bruises. 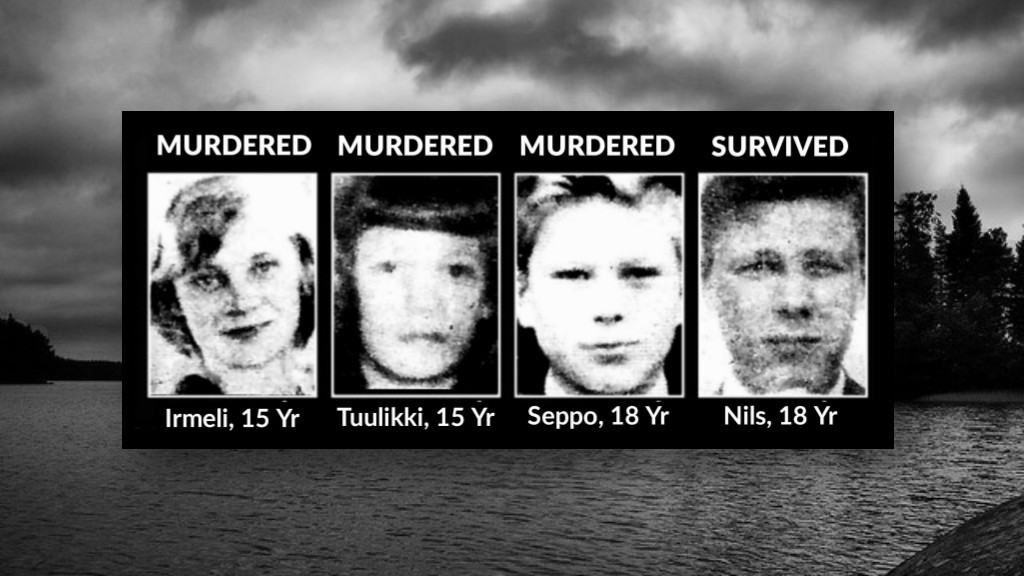 Strange Twists In The Case:

After the Lake Bodom murders, there were a number of suspects including Pauli Luoma, a runaway from a local work department. Luoma later got a clean chit in the murders case after his alibi was confirmed.

Another suspect of the crime was Pentti Soininen who already convicted of a number of violent crimes as well as property crimes. He allegedly admitted to committing the murders while in prison. There was an amount of skepticism about Soininen’s guilt but the truth would never actually be known since he hanged himself at a prisoner transport station in 1969.

Valdemar Gyllstrom was also a prime suspect in the Lake Bodom murders. Gyllstrom was a kiosk keeper from Ottawa and was known for his aggressive behaviour and had apparently confessed to the murders before his death as a result of drowning in Lake Bodom in 1969.

However, no evidence was found to indicate Gyllstrom was involved in the murders, although his wife did admit to his alibi for the crime being a lie since her husband had threatened to kill her if she told the truth about his absence the night of the murders.

In the end, none of the suspects in the multiple murder case were ever convicted and the case still remains unsolved.

Was The Murderer A KGB Spy?

After Gyllström’s wife’s testimony took him off the official suspect list, the suspicion turner to another man, Hans Assmann. An alleged KGB spy and former Nazi, Hans Assmann appeared on the police’s radar the morning of June 6, 1960, the day after the incident.

Assmann came into the Helsinki Surgical Hospital, fingernails black with dirt and his clothes covered in red stains. Hospital staff said that he was acting very nervous and aggressive and had even feigned unconsciousness.

Other than a brief questioning, the police did not pursue Assmann any further, claiming that he too had a solid alibi. Because of this, they never took his stained clothing in for examination, despite the doctors’ insistence that it was blood.

Aside from his suspicious hospital visit, Assmann raised some other red flags in regards to the case. After seeing a news report about the murders, in which they released the young boys’ description of the man they saw leaving the crime scene, Assmann cut his long blonde hair―a characteristic that Nils Wilhelm Gustafsson later corroborated about the killer while under hypnosis.

Many consider Assmann’s potential political connections as the reason for his dismissal.

A Cold Case Went To Its Old Place:

Assmann was the public’s favorite suspect up until 2004, when investigators decided to reopen the case after 44 years, claiming more advanced technology had uncovered new blood evidence found on a pair of shoes and the sudden testimony of a woman claiming to have been camping nearby.

This new DNA analysis led to the arrest of a surprising suspect: sole survivor Nils Wilhelm Gustafsson. Gustafsson led a normal life to that day, but now, to everyone’s surprise, he became the prime suspect and was subsequently charged.

In late March 2004, almost 44 years after the event, Nils Gustafsson was arrested by the police on suspicion of having murdered his three friends.

In early 2005, the Finnish National Bureau of Investigation declared the case was solved based on some new analysis on the bloodstains.

According to the official statement, Gustafsson erupted in jealous anger over his feelings for Björklund, his new girlfriend. She was stabbed multiple times after the fatal blow, while the two other teenagers were killed less savagely. Gustafsson’s own injuries, while notable, were less severe.

The trial started on August 4, 2005. The prosecution called for life imprisonment for Gustafsson. It argued that the re-examination of the old evidence using modern techniques such as DNA profiling raises suspicion towards Gustafsson.

The defence argued that the murders were the work of one or more outsiders and that Gustafsson would have been incapable of killing three people given the extent of his injuries. On October 7, 2005, Gustafsson was acquitted of all charges.

On his acquittal, the State of Finland paid him €44,900 for mental suffering caused by the long remand time. In October 2005, a district court found Gustafsson not guilty of all charges against him. And the cold case again goes to its old place.L

Joyce Carol Vincent – The woman whose skeleton was found 3 years after her death in a London flat!

We use cookies on our website to give you the most relevant experience by remembering your preferences and repeat visits. By continuing to browse our site, you consent to the use of all the cookies.
Read MoreClose & Accept ⟶
Manage consent

This website uses cookies to improve your experience while you navigate through the website. Out of these cookies, the cookies that are categorized as necessary are stored on your browser as they are essential for the working of basic functionalities of the website. We also use third-party cookies that help us analyze and understand how you use this website. These cookies will be stored in your browser only with your consent. You also have the option to opt-out of these cookies. But opting out of some of these cookies may have an effect on your browsing experience.
Necessary Always Enabled
Necessary cookies are absolutely essential for the website to function properly. This category only includes cookies that ensures basic functionalities and security features of the website. These cookies do not store any personal information.
Non-necessary
Any cookies that may not be particularly necessary for the website to function and is used specifically to collect user personal data via analytics, ads, other embedded contents are termed as non-necessary cookies. It is mandatory to procure user consent prior to running these cookies on your website.
SAVE & ACCEPT