Emperor Qin’s terracotta warriors – An army for the afterlife

The Terracotta Army is regarded as one of the greatest discoveries of the 20th century, and is famous around the world. But do you know who built it and how long it took to finish? Here we have listed the top 10 amazing facts you should know before you visit this UNESCO World Heritage Site.

The Terracotta Army is known as the after-life army to protect Qin Shi Huang, the first Emperor of China, while he rests in his tomb. It is regarded as one of the greatest discoveries of the 20th century, and is famous around the world, being the UNESCO World Heritage Site. There are more than 8000 Terracotta Warriors near the historic tomb in China, and surprisingly, each warrior has a different face!

The Tomb Of Qin Shi Huang – A Great Archaeological Discovery:

The Terracotta Army is part of the world’s largest ancient imperial tomb complex, Qin Shi Huang’s mausoleum. The figures, dating from approximately the late third century BCE, were discovered in 1974 by local farmers in Lintong County, outside Xi’an, Shaanxi, China. About 8,000 different life-size statues have been uncovered. It is the largest find of its kind.

The statues are 175–190 cm tall. Everyone differs in gestures and facial expressions, some even with colour showing. It reveals much about the Qin Empire’s technology, military, arts, culture, and military.

Tomb Of Terracotta Army – The Eighth Wonder Of The World: 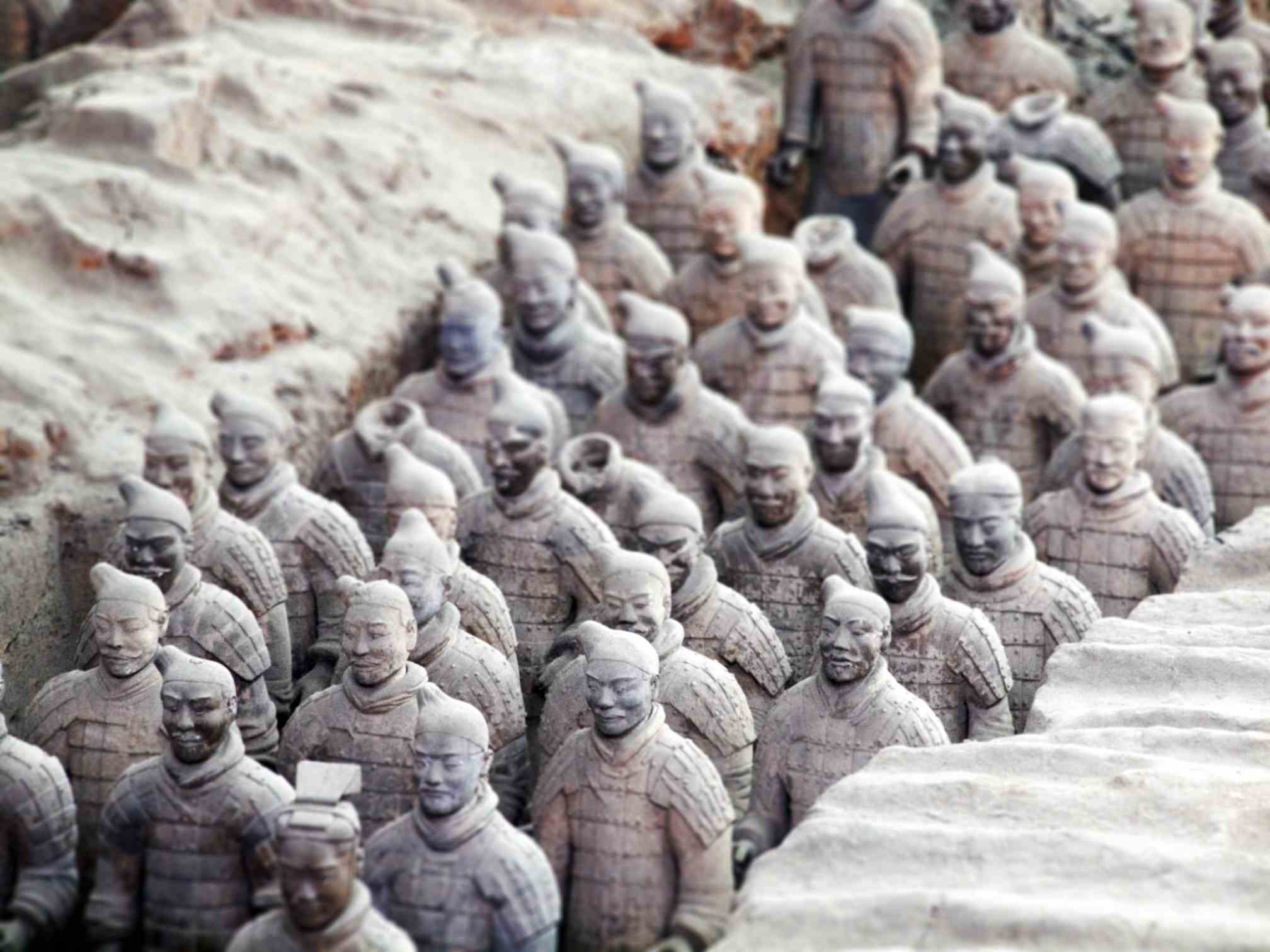 In September 1987, the Terracotta Army was praised as the Eighth Wonder of the World by the former French President Jacques Chirac.
He said:

The army is only part of a garrison in Qin Shi Huang’s mausoleum, which covers nearly 56 square kilometres.

When Was The Tomb Of Terracotta Army Constructed?

The Terracotta Army was created by China’s first emperor, Qin Shi Huang, who began the construction of the army in 246 BC after he (then aged 13) ascended the throne.

It was an afterlife army for Emperor Qin. It was believed that objects like statues can be animated in the afterlife. Thousands of years later, the soldiers are still standing and showcase an extraordinary level of craftsmanship and artistry from 2,200 years ago.

Terracotta Army Museum mainly consists of three pits and an exhibition hall: Vault One, Vault Two, Vault Three, and the Exhibition Hall of the Bronze Chariots.

It is the largest and most impressive (about 230 x 60 m) — the size of an airplane hangar. There are over 6,000 terracotta figures of soldiers and horses, but less than 2,000 are on display.

It is the highlight of the vaults (about 96 x 84 m) and uncovers the mystery of the ancient army array. It has the most army units with archers, chariots, mixed forces, and cavalry.

It is the smallest, but very important (21 x 17 m). There are only 68 terracotta figures, and all of them are officials. It represents the command post.

The Exhibition Hall of the Bronze Chariots: It contains the world’s largest and most intricate ancient bronze artifacts. Each carriage had about 3,400 parts and 1,234 kg. There were 1,720 pieces of golden and silver ornaments, weighing 7 kg, on each carriage.

Since the discovery of the Terracotta Army, apart from more than 8,000 soldiers, 130 chariots and 670 horses have also been uncovered.

Terracotta musicians, acrobats, and concubines have also been found in recent pits as well as some birds, such as waterfowl, cranes, and ducks. It is believed that Emperor Qin wanted exactly the same grand services and treatment for his afterlife.

How The Terracotta Tomb Was Made?

Over 700,000 labourers worked around-the-clock for approximately 40 years to complete all the terracotta sculptures and tomb complex. Construction of the Terracotta Warriors began in 246 BC, when Qin Shi Huang assumed the Qin State throne, and ended in 206 BC, 4 years after Qin’s death, when the Han Dynasty began.

They Are Different From Each Other:

The most strange, as well as fascinating fact about the terracotta warriors is that if you take a close look at them, you will be amazed at the delicate craftsmanship and surprised to find that every single figure has its own separate face, symbolizing a unique warrior in reality.

The infantry, archers, generals, and cavalry are different in their expressions, clothing, and hairstyles. According to some reports, all the Terracotta sculptures were made, resembling the real-life soldiers of ancient China.

Rivers And Sea Of Mercury: 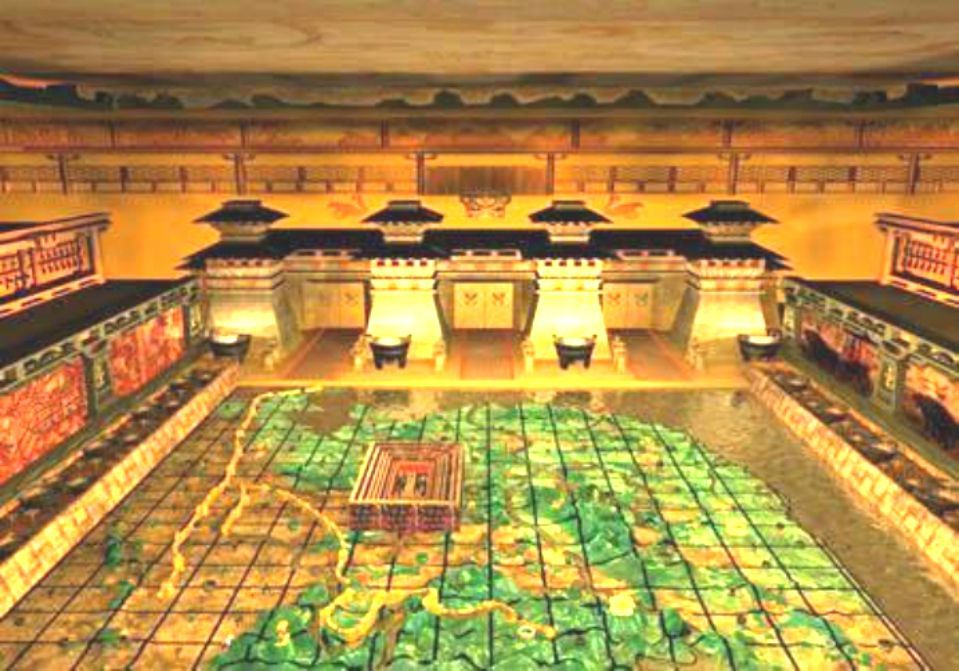 Acording to historians, the tomb of Qin Shi Huang has a ceiling decorated with jewels that imitate the stars in the sky and the ground represents China’s rivers and the sea, with flowing mercury.

Historical accounts convey, emperor Qin Shi Huang died on September 10, 210BC, after ingesting several pills of mercury in the belief that it would grant him eternal life.

The Terracotta Army is a world famous site and always crowded with a large number of visitors, especially on weekends and during Chinese public holidays.

Every year, over 5 million people visit the site, and there were over 400,000 visitors during the week of the National Day holiday (October 1–7).

The Terracotta Warriors and Horses are rich in history and culture. It is advisable to travel with a knowledgeable guide, who can share the background information with you and help you to avoid the crowds.

Here’s How To Get To Terracotta Warriors From Xi’an:

Taking a bus is the most convenient and cheapest way to get to Terracotta Warriors. One can take Tourism Bus 5(306) at East Square of Xi’an Railway station, passing 10 stops, get off at Terracotta Warriors station. The bus running from 7:00 to 19:00 every day and the interval is 7 minutes.

Here’s Where Is Located The Terracotta Warriors On Google Maps:

The man from Taured who vanished as mysterious as he came!

Truths behind the Devil's Bible, the Harvard book bound in human skin & the Black Bible