Dorothy Eady was a British-born Egyptian archaeologist and noted expert on the civilization of Pharaonic Egypt who believed that she was the reincarnation of an ancient Egyptian temple priestess. Even by the flexible standards of British eccentricity, Dorothy Eady was extremely eccentric. 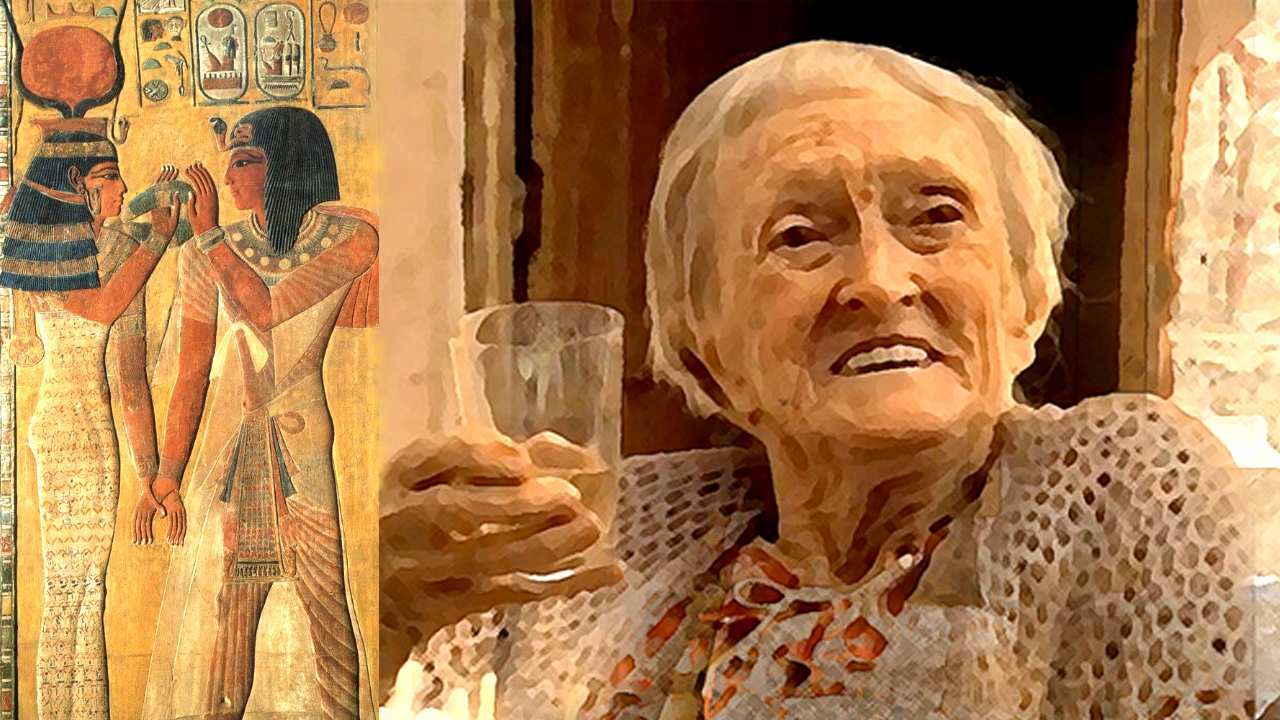 Dorothy Eady earned a significant role in revealing Egyptian history through some great archaeological discoveries. However, besides her professional achievements, she is most famous for believing that she was an Egyptian priestess in a past life. Her life and work have been covered in many documentaries, articles, and biographies. In fact, the New York Times called her story “one of the Western World’s most intriguing and convincing modern case in histories of reincarnation.”

For her miraculous claims, Dorothy has earned enough fame around the world, and people, who are fascinated by her extraordinary claims and works, know her in various names: Om Seti, Omm Seti, Omm Sety and Bulbul Abd el-Meguid.

Dorothy Louise Eady was born on January 16th of 1904, in Blackheath, East Greenwich, London. She was the daughter of Reuben Ernest Eady and Caroline Mary (Frost) Eady. She belonged to a lower-middle-class family as her father was a master tailor during the Edwardian era.

Dorothy’s life changed dramatically when at age three she fell down a flight of stairs and was declared dead by the family physician. An hour later, when the doctor returned to prepare the body for the funeral home, he found little Dorothy sitting up in bed, playing. Soon after, she began to speak to her parents of a recurring dream of life in a huge columned building. In tears, the girl insisted, “I want to go home!”

All of this remained puzzling until she was taken at age four to the British Museum. When she and her parents entered the Egyptian galleries, the little girl tore herself from her mother’s grip, running wildly through the halls, kissing the feet of the ancient statues. She had found her “home”—the world of ancient Egypt.

Although unable to afford higher education, Dorothy did her best to discover as much as she could about the ancient civilization. Visiting the British Museum frequently, she was able to persuade such eminent Egyptologists as Sir E.A. Wallis Budge to informally teach her the rudiments of the ancient Egyptian hieroglyphs. When the opportunity came for her to work in the office of an Egyptian magazine published in London, Dorothy seized the chance.

Here, she quickly became a champion of modern Egyptian nationalism as well as of the glories of the Pharaonic age. At the office, she met an Egyptian named Imam Abd el-Meguid, and in 1933—after dreaming of “going home” for 25 years—Dorothy and Meguid went to Egypt and married. After arriving in Cairo, she took the name Bulbul Abd el-Meguid. When she gave birth to a son, she named him Sety in honour of the long-dead pharaoh.

The marriage was soon in trouble, however, at least in part because Dorothy increasingly acted as though she were living in ancient Egypt as much as, if not more than, the modern land. She told her husband about her “life before life,” and all who cared to listen, that around 1300 BCE there had been a girl of 14, Bentreshyt, daughter of a vegetable seller and ordinary soldier, who had been chosen to be an apprentice virgin priestess. The stunningly beautiful Bentreshyt caught the eye of Pharaoh Sety I, the father of Rameses II the Great, by whom she became pregnant.

The story had a sad end too as rather than implicate the sovereign in what would have been considered an act of pollution with an off-limits temple priestess, Bentreshyt committed suicide. The heartbroken Pharaoh Sety, deeply moved by her deed, vowed never to forget her. Dorothy was convinced that she was the reincarnation of the young priestess Bentreshyt and began to call herself “Omm Sety” that literally means “Mother of Sety” in Arabic.

Alarmed and alienated by her behaviour, Imam Abd el-Meguid divorced Dorothy Eady in 1936, but she took this development in stride and, convinced that she was now living in her true home, never returned to England. To support her son, Dorothy took a job with the Department of Antiquities where she quickly revealed a remarkable knowledge of all aspects of ancient Egyptian history and culture.

Although regarded as highly eccentric, Eady was an accomplished professional, extremely efficient at studying and excavating ancient Egyptian artifacts. She was able to intuit countless details of ancient Egyptian life and rendered immensely useful practical assistance on excavations, puzzling fellow Egyptologists with her inexplicable insights. On excavations, she would claim to remember a detail from her previous life then give instructions like, “Dig here, I remember the ancient garden was here..” They would dig and uncover the remains of a long-vanished garden.

In her journals, kept secret until after her death, Dorothy wrote about the numerous dream visitations by the spirit of her ancient lover, Pharaoh Sety I. She noted that at age 14, she had been ravished by a mummy. Sety—or at least his astral body, his akh—visited her at night with increasing frequency over the years. Studies of other reincarnation accounts often note that in these seemingly passionate affairs a royal lover is often involved. Dorothy usually wrote of her pharaoh in a matter-of-fact way, such as, “His Majesty drops in for a moment but couldn’t stay—he was hosting a banquet in Amenti (heaven).”

Dorothy Eady’s contributions to her field were such that in time her claims of memory of a past life, and her worship of ancient gods like Osiris, no longer bothered her colleagues. Her knowledge of the dead civilization and the ruins that surrounded their daily lives earned the respect of fellow professionals who took full advantage of the countless instances when her “memory” enabled them to make important discoveries, the inspiration for which could not be rationally explained.

In addition to providing this invaluable assistance during excavations, Dorothy systematically organized the archaeological discoveries that she and others made. She worked with the Egyptian archaeologist Selim Hassan, assisting him with his publications. In 1951, she joined the staff of Professor Ahmed Fakhry at Dahshur.

Assisting Fakhry in his exploration of the pyramid fields of the great Memphite Necropolis, Dorothy supplied knowledge and editorial experience that proved invaluable in the preparation of field records and of the final published reports when they eventually appeared in print. In 1952 and 1954, Dorothy’s visits to the great temple at Abydos convinced her that her long-held conviction that she had been a priestess there in a previous life was absolutely true.

In 1956, after pleading for a transfer to Abydos, Dorothy was able to work there on a permanent assignment. “I had only one aim in life,” she said, “and that was to go to Abydos, to live in Abydos, and to be buried in Abydos.” Though scheduled to retire in 1964 at age 60, Dorothy made a strong case to be retained on the staff for an additional five years.

When she finally did retire in 1969, she continued to reside in the impoverished village of Araba el-Madfuna next to Abydos where she had long been a familiar figure to archaeologists and tourists alike. Having to support herself on a negligible pension of about $30 a month, she lived in a succession of mud-brick peasant houses shared by cats, donkeys, and pet vipers.

She subsisted on little more than mint tea, holy water, dog vitamins, and prayer. Extra income came from the sale to tourists of her own needlepoint embroideries of the Egyptian gods, scenes from the temple of Abydos, and hieroglyphic cartouches. Eady would refer to her little mud-brick house as the “Omm Sety Hilton.”

Just a short walk from the temple, she spent countless hours there in her declining years, describing its beauties to tourists and also sharing her vast fund of knowledge with visiting archaeologists. One of them, James P. Allen, of the American Research Center in Cairo, described her as a patron saint of Egyptology, noting, “I don’t know of an American archaeologist in Egypt who doesn’t respect her.”

In her last years, Dorothy’s health began to falter as she survived a heart attack, a broken knee, phlebitis, dysentery and several other ailments. Thin and frail but determined to end her mortal journey at Abydos, she looked back on her highly unusual life, insisting, “It’s been more than worth it. I wouldn’t want to change anything.”

When her son Sety, who was working at the time in Kuwait, invited her to live with him and his eight children, Dorothy declined his offer, telling him that she had lived next to Abydos for over two decades and was determined to die and be buried there. Dorothy Eady died on April 21, 1981, in the village next to the sacred temple city of Abydos.

In keeping with ancient Egyptian tradition, her tomb at the western side of her garden had at its head a carved figure of Isis with her wings outspread. Eady was certain that after her death her spirit would journey through the gateway to the West to be reunited with the friends she had known in life. This new existence had been described thousands of years earlier in the Pyramid Texts, as one of “sleeping that she may wake, dying that she may live.”

In her whole life, Dorothy Eady kept maintaining her diaries and wrote a number of books centred on Egyptian history and her reincarnation life. Some significant of them are: Abydos: Holy City of Ancient Egypt, Omm Sety’s Abydos and Omm Sety’s Living Egypt: Surviving Folkways from Pharaonic Times.

June And Jennifer Gibbons – The Story Behind The Silent Twins