The crawling ghost of light

For some years, a photo is being shared and reshared on the internet with a caption that reads:

“A man took a photo of his young daughter playing in their living room, and the resulting image clearly shows a ghostly, crawling form of energy in front of her. It seems as if the little girl can see it too. Could it be the spirit of her deceased mother?”

Here Is The Photo: 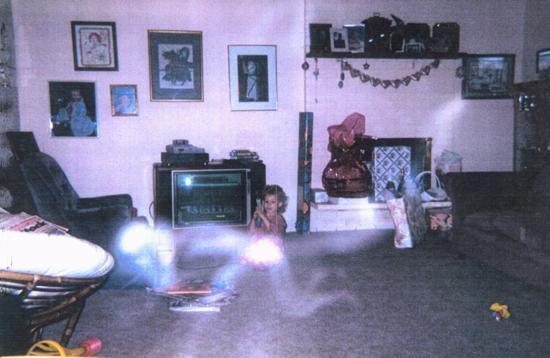 So was a deceased mother caught on camera playing with her daughter?

Well, it certainly looks as though the child is looking in the direction the anomaly is present in. Also when playing with children it is quite common to get down on their level, hands and knees and the ‘ghost of light’ seems to be doing that.

It seems like there is some interaction going on here. On the surface any-ways. Do you think it’s a real photo of the ghost, possibly the child’s deceased mother??

However, many have suggested that the ‘ghost of light’ could be nothing more than a smearing of light on a negative or that some light might be reflected back towards a camera or scanner from what could be a glossy photo print.

Unfortunately, we do not have much information about this particular photo as generally it appears into lists of ‘most creepy photos’ without any in-depth details or info present asides from the caption. Even, we are unclear if this photo is photoshopped or not.

Could it be just our brains interpreting things as looking like a ghostly human called pareidolia?

Pareidolia is the tendency for the incorrect perception of a stimulus as an object, pattern or meaning known to the observer, such as seeing shapes in clouds, seeing faces in inanimate objects or abstract patterns, or hearing hidden messages in music. Pareidolia can be considered a subcategory of apophenia.

Common examples are perceived images of animals, faces, or objects in cloud formations, the Man in the Moon, the Moon rabbit, and other lunar pareidolia.

Giants and beings of unknown origin were recorded by the ancients