Blanche Monnier, a beautiful mid-19th century young French woman who turned into something one cannot imagine! 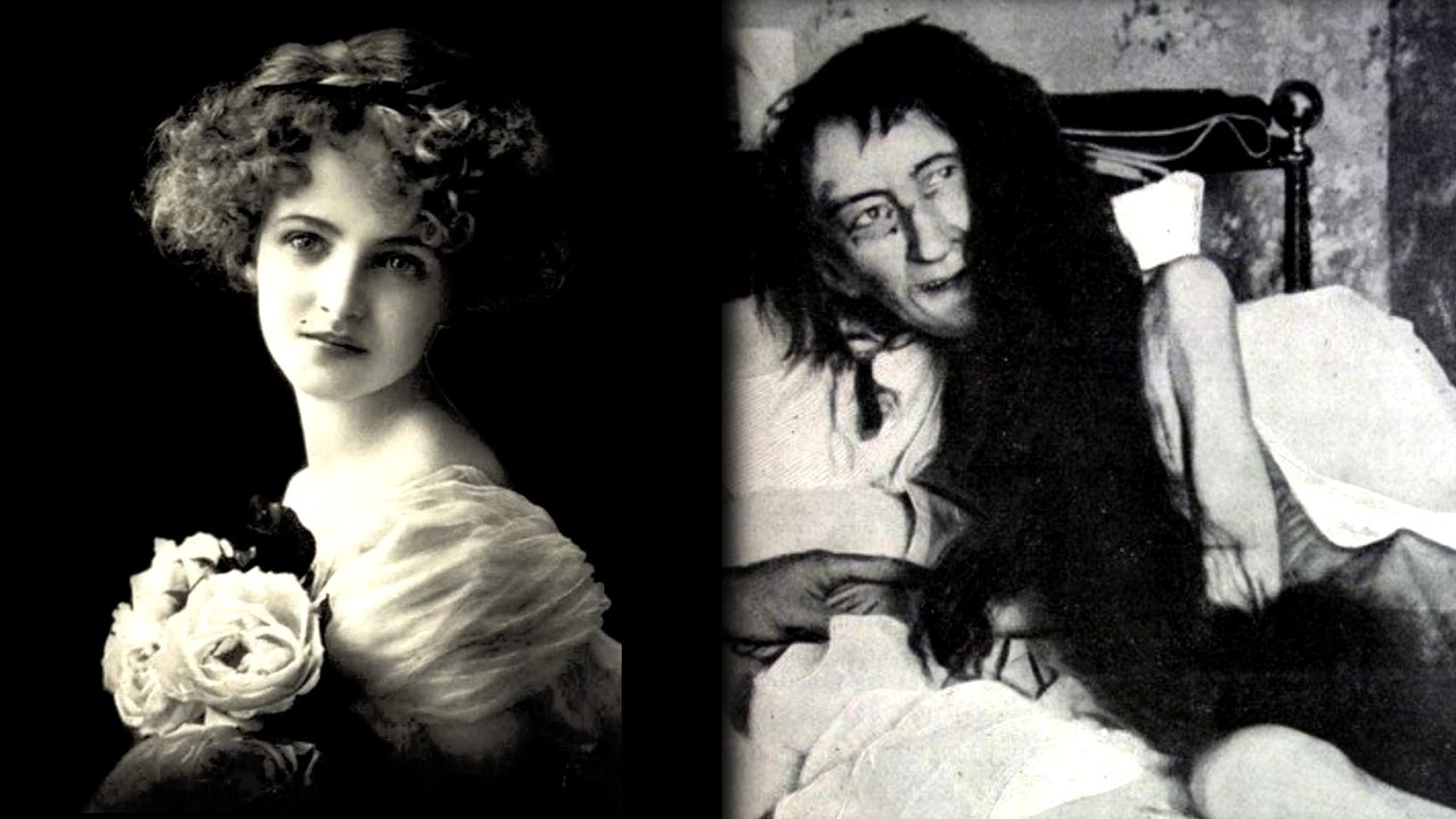 Blanche Monnier was renowned for her physical beauty, and attracted many potential suitors for marriage. At the age of 25, she wanted to marry an older lawyer who was not to her mother Louise’s liking. Her disapproving mother angered by her daughter’s defiance, locked her in a tiny, dark room in the attic of their home, where she kept her secluded for 25 years.

Her mother and brother carried on with their daily lives pretending to mourn Blanche’s death. Eventually, she was found by police, middle-aged and in an emaciated and filthy condition weighing merely 25Kg. Blanche had not seen any sunlight for her entire captivity

Mademoiselle Blanche Monnier lived at 21 rue de la Visitation Street in a wealthy neighbourhood of Poitiers, France with her brother, Marcel Monnier, who was a law-school graduate, and her parents, the highly regarded Emile Monnier, the head of a local arts facility, who died in 1879, and Madame Louise Monnier.

The Monnier’s were a local, upper middle-class family that was well known and well-liked in the community and were of such kind that they had even earned the “Committee of Good Works” award that was given to citizens who “displayed the highest of virtues.”

If Blanche Monnier hadn’t made the wrong choice for a future husband, history might not have recorded her existence. She chose someone whom her mother, disliked. In fact, Madam Monnier disliked her daughter’s love interest so much that she locked the girl in a tiny room until Blanche changed her mind.

Blanche stayed with her choice, even after she had 25 years to think about her decision while living in the same tiny room. Perhaps she would have been willing to hold out even longer if it weren’t for the attorney general in Paris, who released Blanche from her prison cell.

Blanche was once a beautiful French socialite from a well-respected family. A timid child, she struggled with insecurity throughout her teenage years. She didn’t get along well with her mother and suffered from bouts of anorexia. In 1876, when she was 25, Blanche had grown up to be a charming young woman. She had fallen madly in love with an older lawyer who lived nearby, and wanted to marry him.

However, this decision made her mother unhappy, so she opposed her daughter’s will. Madam Monnier argued that her daughter could not marry a “penniless lawyer,” who was far older than Blanche, and used all her means to prevent such a marriage. She tried to change Blanche’s mind, to forbid her decision, to plot against her, but with no success. The young woman had no intention of fulfilling her mother’s wishes.

Then Blanche suddenly vanished from society. In Paris, none of her friends knew where she was. Her mother and brother mourned her and continued with their daily lives. Soon, Blanche was forgotten.

❱❱  24 Scariest Haunted Dolls You Do Not Want In Your Home

The Fate Of Blanche Monnier:

Years passed, the lawyer Blanche loved passed away, and her fate remained a mystery. Until May 23rd of 1901, when the attorney general of Paris received a strange anonymous letter saying:

“Monsieur Attorney General: I have the honour to inform you of an exceptionally serious occurrence. I speak of a spinster who is locked up in Madame Monnier’s house, half-starved and living on a putrid litter for the past twenty-five years – in a word, in her own filth.”

Such claims were shocking for the police. It was a monstrous scenario, and no one could believe that Madam Monnier was capable of such a thing. She was a well-respected citizen in Paris, from an aristocratic family, awarded for her generous contributions to the city by the Committee of Good Works.

Officers were sent to inspect the house, and although they were denied entrance at first, they forced the door open and got inside. They searched the home and discovered a tiny, dark, foul-smelling room on the second floor. And when they pried open the windows, there was Blanche Monnier.

Or at least what was left of her. Covered in food and feces, with bugs all around the bed and floor, was the 50-year-old Blanche weighing barely 55 pounds. She didn’t resemble a human.

Malnourished, lacking sunlight, and cut off from any social contact for 25 years, Blanche seemed like a scared animal when the officers took her out.

Police were astounded and disgusted. One commented:

“We immediately gave the order to open the casement window.  This was done with great difficulty, for the old dark-coloured curtains fell down in a heavy shower of dust. To open the shutters, it was necessary to remove them from their right hinges.  As soon as light entered the room, we noticed, in the back, lying on a bed, her head and body covered by a repulsively filthy blanket, a woman identified as Mademoiselle Blanche Monnier.  The unfortunate woman was lying completely naked on a rotten straw mattress.  All around her was formed a sort of crust made from excrement, fragments of meat, vegetables, fish, and rotten bread.  We also saw oyster shells and bugs running across Mademoiselle Monnier’s bed. The air was so unbreathable, the odour given off by the room was so rank, that it was impossible for us to stay any longer to proceed with our investigation.”

“Time passed, and Blanche was no longer young. The attorney she so loved died in 1885. During all that time the girl was confined in the lonely room, fed with scraps from the mother’s table–when she received any food at all.  Her only companions were the rats that gathered to eat the hard crusts that she threw upon the floor.  Not a ray of light penetrated her dungeon, and what she suffered can only be surmised.”

Now, everyone in the city (or perhaps country) went in shock because Madame Monnier took another avenue to ensure that her daughter never marries a good-for-nothing and tarnish their family’s good name.

❱❱  10 Of The Strangest Rare Diseases You Won't Believe Are Real

The Imprisonment Of Blanche Monnier:

One evening, with the help of her son, Madame Louise, determined to stop the wedding, tricked Blanche into an upper attic room and then padlocked her in, promising only to release her when she swore to end the relationship.

And by golly, she did just that! Blanche was apparently determined, at least at first, not to cave to her mother’s will, and so remained in that padlocked, shuttered and sunless room quietly. But, after a while, neighbours would recall hearing Blanche beg to be released, stating her imprisonment was unfair punishment, pleading for mercy.

However, because she would not swear to give up her one true love, Madame would not open the door. And she would not open it for the next 25 years! Even after the lawyer had died in 1885, Madame Monnier kept her daughter trapped in the attic that had become her prison. They gave her foods and water, but not much as a young woman really needs.

As the officers in the attic quickly wrapped a blanket around the frail woman Blanche and rushed her to the hospital in Paris, others were searching the rest of the house and came across Madame Monnier sitting in the living room and Marcel in his office.  Both were taken in for questioning and promptly arrested.

Madame was immediately arrested but died of a heart attack in prison after only 15 days. Before her death, she confessed to the inhumane treatment of her daughter, her last words being, “Ah, my poor Blanche!”

Blanche’s brother, Marcel, who was being accused of being his mother’s accomplice in the cruel act of his sister’s imprisonment, would now have to stand trial alone. He was first sentenced to 15 months in prison, but later released as he never physically restricted his sister’s movement. He even stated that Blanche had lost her mind and at no point could she have not escaped that room. It was her choice not to move, not that she wasn’t permitted to leave.

As for Blanche, she was admitted to a psychiatric hospital. She never returned to society. She lived until 1913 and died in a sanatorium in Bois.

At the hospital, Blanche was washed and dressed and given a room. Over a period of time, she did gain weight and the ability to sit in a room with the window drapes drawn open, but she never did lay claim to her sanity again. She died in a psychiatric hospital in 1913, 12 years after her rescue.

Who Was Behind The Anonymous Letter?

The identity of the person who penned the letter, that ultimately freed Blanche from her prison, has never come to light. Some have theorized that it was her brother, Marcel, who sent the letter to the authorities and not for the perfectly right reasons either.

It is suggested that Marcel knew their mother was growing frail and would not live long so he realized that he would be left with the dirty little secret in the attic. Therefore, to get rid of his insane sister, he decided to get the family secret out in the open somehow. Over the years, it turned into a very real crime.

He was a lawyer and he knew the loophole of justice very well. By exposing the truth under his mother’s watch, he would be able to claim his innocence in the whole mess and live out his life with neither being a further burden on him. And that is exactly what happened.

If it was true, then the saddest part of this story is there wasn’t a single person who did really care about Blanche, and also wondering, how can such a cruel crime happen to Blanche when her own lover was a lawyer!

Less cynical souls believe that a household servant leaked it to a new boyfriend, who could have cared less about the high and mighty Monnier’s, and he wrote the letter, sent it to the authorities and let the chips land where they may.

It’s insanely bizarre to think that a mother could go to such lengths to destroy her daughter’s life and keep her locked up for so many years. It’s also incredible that no one came to Blanche’s rescue despite her many pleas for help. Denied being with the man she wanted, her life took an unimaginably tragic turn. What a heartbreaking and horrific story!

Diana Of The Dunes – The Indiana Ghost Story That Will Leave You Absolutely BaffledThe P-40 Ghost Plane: An Unsolved Mystery Of World War IIThe Most Haunted Houses Of DenverPupa – The Haunted Doll