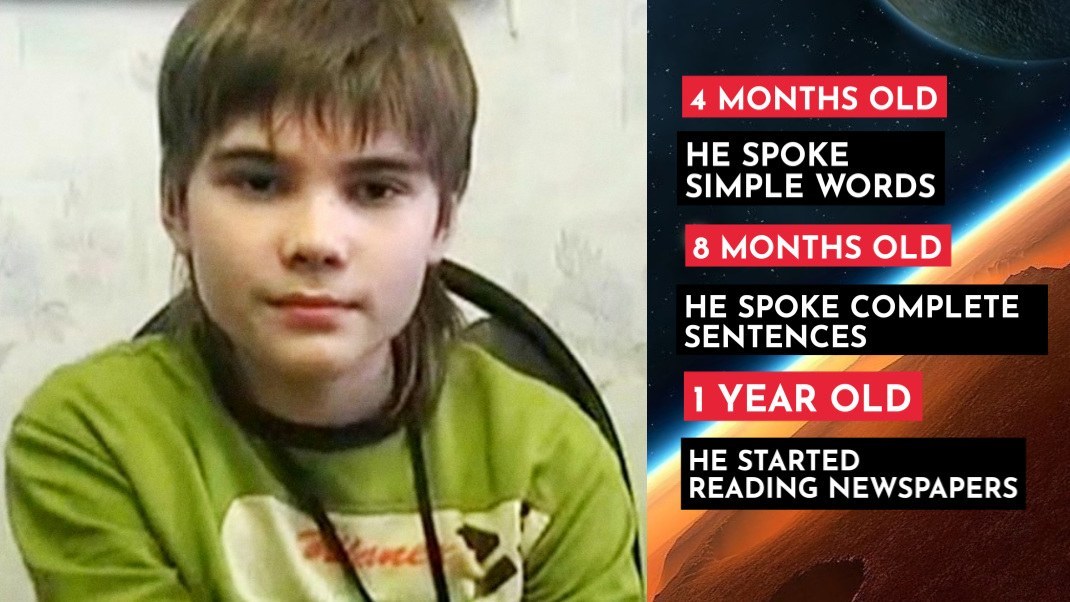 Today, scientists have achieved such knowledge and power that they could give life to a dead, shape human history, bring the reality of a Death Star from billions of light-years away, and even they are now planning to make Mars as our second home. But what if we did all these things in the distant past about millions of years ago? Impossible! Right? But according to the claims of a Russian boy named Boris Kipriyanovich, it’s quite true. He has shown such signs that will make anyone believe in him.

In the Volgograd region of Russia, there is a boy named Boris Kipriyanovich, often nicknamed “Boriska” or “Little Boris,” is believed to be a Reincarnated Star Child. His knowledge and skills have fascinated not only his parents but also the researchers who have studied him.

Boriska has been showing extraordinary signs since the day he born on January 11, 1996. His mother said,

“It all happened so fast I did not even feel any pain. When they showed me the baby, he looked at me with a look of an adult. As a physician, I knew babies’ eyes cannot focus on objects. However, my little baby looked at me with his big brown eyes.”

When Boriska was just 4 months old he amazingly spoke simple words and at the age of 8 months, he grew accustomed to speak simple sentences. Moreover, by the time his age was 1 year, he was able to read the simple headlines of the newspapers.

According to Boriska’s parents, he showed such extraordinary psychic abilities that, at first, they were worried about their baby. But day by day, they realized that their Little Boris is not like an ordinary child, he is a divine child with extraordinary intelligence.

They say, their child regularly visits a well-known Anomalous Zone on a mountain to fulfill his needs in energy. He loves reading about celestial objects, discussing strange astronomical phenomena.

Here’s What Boris Kipriyanovich Had Revealed:

Boriska revealed such detailed information about Mars, planetary systems, other civilizations and unknown extraterrestrial things that there was no way he could know about. He had achieved amazing language skills at the age of 2, and started talking about the universe at the age of 3.

Boriska described his previous life, which was on the planet Mars according to him. He added that the Martian civilization was so advanced that they could travel through the galaxies. Moreover, they live underground as the environment was poisoned by the radiation in a devastating nuclear war.

Boriska says he is not the only child from outer space on Earth, claiming there are others like him who were also sent here on a specific mission to save humanity.

He claims they are all reincarnations and referred to as “Indigo Children” who have supernatural abilities and survived the Martian wars.

Furthermore, Boriska told that he had visited earth on several occasions, recounting a number of prehistoric events.

The Martian Spacecraft As Per Little Boris’ Description:

According to Boriska, he had visited earth during the Lemurian Civilization, a prehistoric civilization in the lost continent (hypothetical) of Lemuria located in either the Indian or the Pacific Ocean.

Boriska even told about his self-designed spacecraft. He said,

“It consists of six layers,” he said. “25%-outer layer, made of durable metal, 30%-second layer made of something similar to rubber, the third layer comprises 30%-once again metal. The final 4% is composed of a special magnetic layer.” “If we are to charge this magnetic layer with energy, those machines will be able to fly anywhere in the Universe.”

Telling about the Lemurian Civilization, Boriska also described the lifestyle of the Martians and told that they cannot breathe oxygen as it ages them. He asserted that the Martians stay young for 30-35 years.

Was Everything True What Boriska Said?

Boriska further claimed that he had seen the end of that Lemurian Civilization about 70,000 years ago. At first, his parents did not believe him so they researched the things he said and they found them true precisely.

Specialists of the Institute of Earth Magnetism, Ionosphere and Radio-waves of the Russian Academy of Sciences (IZMIRAN) photographed his aura, which turned out to be unusually strong. He has the orange spectrogram, which indicates that he is a very joyful person, suggesting he was not a psychic patient or a mentally disturbed person at all.

Where Is Boris Kipriyanovich Now In 2020?

Boriska is said to have disappeared along with his mother and a number of attempts by Western Journalists to track him down has failed. It is said that one journalist was once informed by one of the Russian associates that Boriska is now in a remote village under the protection of the Russian Government and an attempt to reach him would be futile. Whereas, some believe that he lives somewhere in Moscow.

Later, a several psychics have claimed that they have been able to communicate with Boriska through their minds and that they have been replied by Boriska with a similar saying that he is in a remote place with his mother but he is doing okay and that the Russian Government has something to do with it. However, no one knows exactly where he is now.

Do you think that Boris Kipriyanovich is really a Reincarnated Martian? Or, he is just bluffing? Share your worthy opinions.

Boriska – The Boy From Mars:

The British Pet Massacre Of 1939: The Disturbing Truth Of The Pet Holocaust

Truth And Lies About Amorous Exploits Of Grigori Rasputin