In Southern Africa, about 150 km west of port Maputo, Mozambique, archaeologists discovered the complex ruins of a giant stone city, thought to be built by an advanced ancient civilization. Researchers determined the age of the site by measuring the erosion rate of the dolerite.

According to many, this historical find may rewrite history as a study that shows the 1500 square kilometre metropolis was built between 160,000 and 200,000 years ago!

The Ruins Of The Ancient Southern African City: 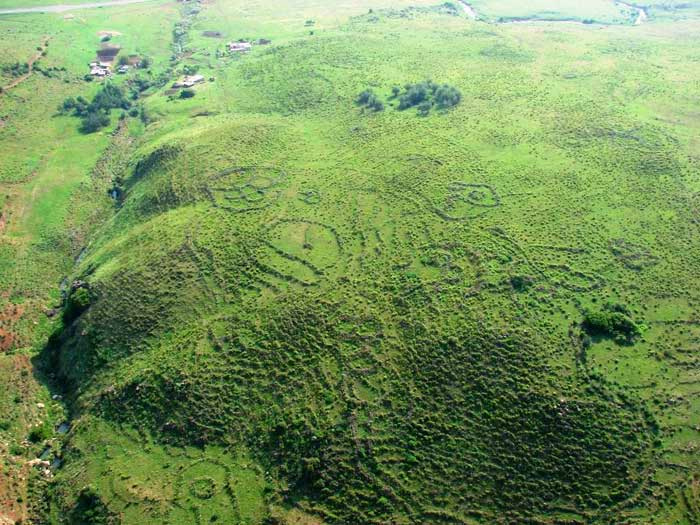 The walls of this ancient Southern African city are made of Dolerite. By calculating the rate of Dolerite erosion, the structure itself has been dated to 200,000 years old. Although this date has inflicted a controversy among historians and archaeologists on its authenticity.

There are ruins of huge stone circles in the ancient site that are buried in the sand and most of which are not visible through naked eyes. These strange circles have been found in the aerial view and satellite imagery.

Where Egyptian pyramids and Mesoamerican structures are thought to be the oldest advanced structures in the world being not more than 6000 years old, these prehistoric yet complex ruins have baffled many researchers. Even the most ancient structure on earth, the Megalithic Temples of Malta, was not built before 3600BC.

The mysterious ruins of 200,000 years old structure in Mozambique’s Maputo, thought to be part of an ancient city that spans 10,000kms, have been discovered by Michael Tellinger and Johan Heine. It has roads joining complex circular structures with agricultural areas indicating that it belonged to a highly advanced civilization. Tellinger has written about his finds extensively in his book: Temples of the African Gods.

The circled walls found in this site are estimated to be 1500 square kilometres, although each wall is only 3-5 meters high in places. However, the walls were far taller in its time, which would have been affected due to weather-erosion. To make the site more interesting, it’s geologically situated beside numerous gold mines, and it has been suggested they were the first gold miners.

The further study found, ancient inhabitants of this city carved detailed images into the hardest rock walls, worshipped the sun, and are the first to inscribe an image of the Egyptian Ankh – key of life and universal knowledge.

READ:  Toumaï: Our Earliest Relative Who Left Questions To Us Around 7 Million Years Ago!

It’s truly wondering to see how on earth there could be a symbol of Egyptian god thousands of years before the Egyptian civilization came to light.

Historians believed Egyptians were the first to worship the gods engraved all over Egyptian temple walls. But it is more likely that the Egyptians inherited their beliefs from this Southern African culture.

“The photographs, artifacts and evidence we accumulated, point towards a lost civilization that has never before been and precedes all others- not for a few hundred years, or a few thousand years … but many thousands of years,” Tellinger said.

Criticism Of Discovery Of The 200,000 Years Old City In Southern Africa:

Unfortunately, mainstream theorists and historians still have no desire to conduct an in-depth study on this Southern African site or to let go of their previous postulations.

According to them, plenty of human remains, artifacts and even settlements may have existed that date to 200,000 years old, but no ruins in the world are dated back to so far.

Additionally, they cite the discoverers Michael Tellinger and Johan Heine to be “independent researchers” and firefighters respectively, who did not scientifically date the site through any accepted method but instead aligned it to the stars.

Questions exist over the accuracy of the method of dating by dolerite erosion, given the hardness of the material. They assert that it’s not a valid way to date human construction, and neither of them is qualified to date such.

Therefore, Tellinger still hasn’t received any affirmative support or help from the mainstream researchers for this miracle discovery. However, the ancient astronaut theorists believe it’s the collective hubris of theorists, wanting their theories of historical civilizations to remain valid.

Despite the Sumerian tablets of the kings’ list, which detail a list of kings spanning over a 224,000 time period; 10 of which are kings documented to have existed before the biblical flood. “Archeologists don’t want to deal with, or acknowledge these time periods,” said Tellinger.