We all know about the Bermuda Triangle, which is also known as the “Devil’s Triangle” because of its dark past. Unexplained deaths, disappearances and disasters are the common scenes in its stories. But did you ever heard of the “Bridgewater Triangle?” Yes, this is an area of about 200 square miles within southeastern Massachusetts in the United States, which has often been called the “Bermuda Triangle of Massachusetts.”

Bridgewater Triangle is claimed to be a site of alleged paranormal phenomena, ranging from UFOs to poltergeists, orbs, balls of fire and other spectral phenomena, various bigfoot-like sightings, giant snakes and “thunderbirds.” also with large monsters.

In his book, Coleman wrote that the Bridgewater Triangle encloses the towns of Abington, Rehoboth and Freetown at the points of the triangle. And inside the triangle, there are Brockton, Whitman, West Bridgewater, East Bridgewater, Bridgewater, Middleboro, Dighton, Berkley, Raynham, Norton, Easton, Lakeville, Seekonk, and Taunton.

Historical Sites In The Bridgewater Triangle:

Within the Bridgewater Triangle area, there are a few historic places that attract people from all over the world. Some of them are cited here at a glance:

Central to the area is Hockomock Swamp, which means “the place where spirits dwell.” It is a vast wetland containing much of the northern part of southeastern Massachusetts. Hockomock Swamp has been feared for a long time. Even in modern times, it has, for some, remained a place of mystery and fear. Many people said to have vanished there. Therefore, the paranormal enthusiast community love to wandering this place.

Also found within the boundaries of the Bridgewater Triangle is the Dighton Rock. It’s a 40 ton boulder, originally located in the riverbed of the Taunton River at Berkley. The Dighton Rock is known for its petroglyphs, carved designs of ancient and uncertain origin, and the controversy about their creators.

The Freetown-Fall River State Forest has reportedly been the site of various cult activity including animal sacrifice, ritualistic murders committed by admitted Satanists, as well as a number of gangland murders and a number of suicides.

The supposed site of where the Native American People Wampanoag historical figure Anawan received the lost wampum belt from King Philip, legend has it the ghost of a man can be seen sitting on the rock with his legs crossed or with outstretched arms. Located within the Freetown-Fall River State Forest.

An inscribed stone located near Forest Street in West Bridgewater which was found near a missing person’s body. Also known as “suicide stone,” the rock was found with the inscription: “All ye, who in future days, Walk by Nunckatessett stream Love not him who hummed his lay Cheerful to the parting beam, But the beauty that he wooed.”

Mystery Of The Bridgewater Triangle: 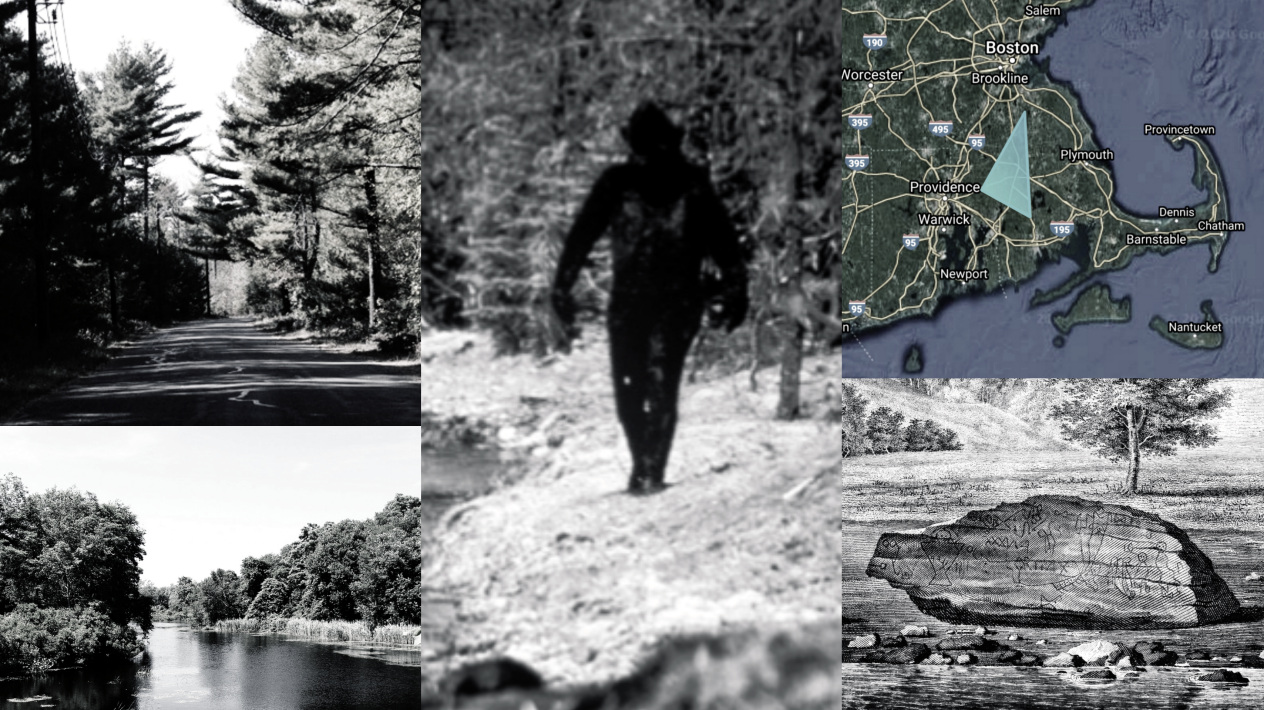 Some strange scenarios and happenings have made the Bridgewater Triangle one of the greatest mysterious places existing on Earth.

Common to most of these areas is a mix of reported phenomena that includes reports of UFOs, mysterious animals and hominids, ghosts and poltergeists, and animal mutilations.

There have been several reported sightings of a bigfoot-like creature in the triangle, usually near the Hockomock swamp.

Giant birds or pterodactyl-like flying creatures with wingspans 8–12 feet are claimed to have been seen in neighbouring wamp and neighbouring Taunton, including a report by Norton Police Sergeant Thomas Downy.

Various incidents of animal mutilation have been reported, particularly in Freetown and Fall River, where local police were called to investigate mutilated animals believed to be the work of a cult. Two specific incidents in 1998 were reported: one in which a single adult cow was found butchered in the woods; the other in which a group of calves were discovered in a clearing, grotesquely mutilated as if part of a ritual sacrifice.

According to one tale, the Native Americans had cursed the swamp centuries ago because of the poor treatment they received from the Colonial settlers. A revered object of the Wampanoag people, a belt known as the wampum belt was lost during King Philip’s War. Legend says that the area owes its paranormal unrest to the fact that this belt was lost from the Native people.

There’s an area in neighbouring Vermont that has the similar accounts to the Bridgewater Triangle which is popularly known as the Bennington Triangle.

Some claim the Bridgewater Triangle area to be a supernatural place. While others have deemed it “cursed,” that’s why many people who have such bitter experience don’t want to go back there again. On the other hand, some have found exciting themselves to wander these historic lands. The fact is that fear and mystery complement each other and from this, thousands of incredibly strange places like Bridgewater Triangle have been born in this world. And who knows what happens there?

A75 Kinmount Straight – The most haunted highway in Scotland

The Dog Suicide Bridge ― A lure of death in Scotland

We use cookies on our website to give you the most relevant experience by remembering your preferences and repeat visits. By continuing to browse our site, you consent to the use of all the cookies.
Read MoreClose & Accept ⟶
Manage consent

This website uses cookies to improve your experience while you navigate through the website. Out of these cookies, the cookies that are categorized as necessary are stored on your browser as they are essential for the working of basic functionalities of the website. We also use third-party cookies that help us analyze and understand how you use this website. These cookies will be stored in your browser only with your consent. You also have the option to opt-out of these cookies. But opting out of some of these cookies may have an effect on your browsing experience.
Necessary Always Enabled
Necessary cookies are absolutely essential for the website to function properly. This category only includes cookies that ensures basic functionalities and security features of the website. These cookies do not store any personal information.
Non-necessary
Any cookies that may not be particularly necessary for the website to function and is used specifically to collect user personal data via analytics, ads, other embedded contents are termed as non-necessary cookies. It is mandatory to procure user consent prior to running these cookies on your website.
SAVE & ACCEPT