We all love to do photography on various occasions but how would you feel when you could see an obscured person on your photograph and you are very sure that while snapping this, there was no one in front of your camera? That’s exactly what happened to a lady in 1930 while taking some photographs in her basement for a renovation purpose. 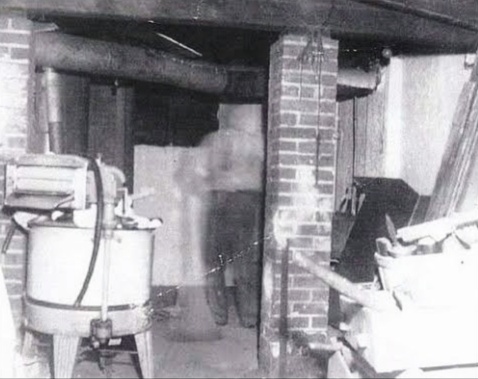 Above, this is the photograph that the lady took in her basement almost 90 years ago from today. And you can see an obscure person standing in this vintage photo.

The Story Behind The Basement Ghost Photograph:

According to the lady, when she paid attention to the shape of obscure body appeared in the photo, she was very sure that it was the image of her beloved hubby who had already died a few years back in 1923. It was the day when she and her husband were renovating this same basement, but unfortunately, her husband died of a severe heart attack.

A Keen Observation Of The Basement Ghost Photograph:

We don’t have many more words to explain the photograph than what itself says.

If you take a keen observation of this photograph, you can distinctly see an obscure man’s figure with dark pant, a lighter shirt, holding a broom in his hand with a background in the basement.

This copy is cropped from the original image so the man’s figure is looking in the centre of that photo. In the original photo, it has taken place on one side.

Why Do Ghosts Wear Human Clothes Or Appear With The Material Objects?

People often wonder that why ghosts wear clothes or appear with material objects, like here holding a broom.

According to the paranormal theories, ghosts may look like a normal, living person, a semitransparent wispy figure, or anywhere in between. Visual apparitions may also be of animals or objects even like scents or smells. It’s called “Manifestations.” The energy that could replicate anything.

Many paranormal researchers believe that ghosts manifest themselves wearing the clothes they were most comfortable wearing in life. They often manifest with the things of which the images and events had the most impact on their mind at the time of their death.

Many people, when die, talk about they have to go to school, or they are being called by their mother―or many such words that seem to be disharmonious at the moment. But if you take a closer look at their life, you can understand why they were talking such things on their deathbed. It’s eternal truth to any paranormal researcher that “attachment” is the cause behind any paranormal hauntings. That’s the thing that haunts people.

We know, this photograph could be photoshopped or distorted through other digital software-effect but the timeline when it was taken is beating this theory. Even, many analysts, after thoroughly examining it, have stated that the photo was not photoshopped at all. However, it still doesn’t mean that other trickeries such as long exposure time or movement etc which have similar effects on a photo were not used.

According to that lady, she was absolutely alone in the basement while snapping this photo. So if we assume this was really the insatiable spirit of her husband, it may be that he was still busy doing his incomplete work for the renovation of his basement.

In the end, there are a number of questions that are clicking our head, was it a spectral-capture on the film? Or, it was a simple light anomaly or just a digital effect or long exposure time and movement?

Fact or fiction you decide!

The mystery behind the "Rock Ship of Masuda" in Japan

Skinwalker Ranch – A trail of mystery