Did this Dean Koontz’s book really predict the COVID-19 outbreak? 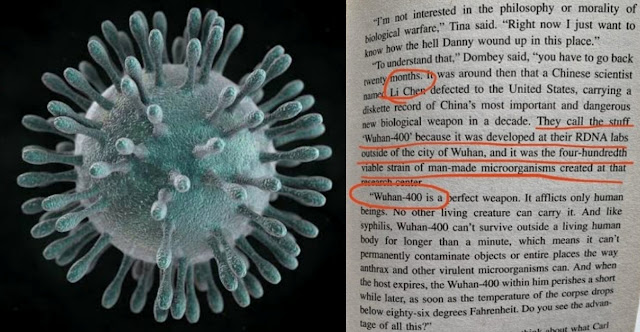 More than 284,000 people have died because of the coronavirus (COVID-19) outbreak. The Chinese city Wuhan was the epicentre of the virus which has now spread to over 212 countries and infected nearly 42,00,000 people globally. It is said that there’s a popular food market in Wuhan city from where it all started.

Since the deadly virus COVID-19 has spread over a large number of countries, the World Health Organization (WHO) lately declares coronavirus outbreak to be a ‘pandemic’ instead of ‘epidemic’.

There’s a clear difference between pandemic and epidemic. Pandemic is the spread of a disease across a large region while the epidemic is a widespread occurrence of a disease in a particular region.

But did you know an early 80s fiction book “The Eyes of Darkness”―written by the bestselling American author Dean Koontz―has come into a big controversy for incredibly predicting the Coronavirus outbreak? Some believe it’s a miracle, while some think it’s nothing more than a coincidence.

Dean Koontz’s Prediction In His Book “The Eyes Of Darkness”:

Written in 1981, the book of “The Eyes of Darkness” puts forth a fictional story about a Chinese military laboratory that creates a deadly virus as part of a program dealing with biological weapons.

Now, an excerpt from Chapter 39 amazed everyone. It tells about a laboratory in Wuhan, which is responsible for the release of the deadly virus called Wuhan-400.

“The scientist leading the Wuhan-400 research is called Li Chen, who defects to the United States with information about China’s most dangerous biological weapon called Wuhan-400.. the man-made microorganisms in this weapon affect only people rather than animals and cannot survive outside the human body or in environments colder than 30 degrees Celsius,” ―the controversial excerpt read.

Netizens’ Reactions To This Excerpt Taken From The Dean Koontz’s Book, “The Eyes of Darkness”:

The similarities between the made-up virus and the Wuhan virus has got netizens struggling to comprehend the improbable coincidence. They are sharing the pictures of Koontz’s book, highlighting the excerpts. In response, several netizens have posted pictures of the book’s older editions that mention “Gorki-400” instead of “Wuhan-400.”

Gorki is a small city, 400 kilometres to the east of Moscow, Russia. And many explain the name of the virus was indeed altered in the book, possibly due to the end of the Cold War in 1991.

Summary Of “The Eyes of Darkness”:

In Koontz’s own description, it is a “…a modest little thriller about a woman, Tina Evans, who lost her child, Danny, when he was in an accident on a trip with his scouting troop.”

She later finds out her son was accidentally infected with the virus. Download and read this interesting book from here.

Another Prediction – Did Sylvia Browne Predict The Coronovirus Outbreak In Her Prophecy Book “End of Days?”

A self-described psychic, Sylvia Browne also predicted the global outbreak of COVID-19 in her book titled End of Days: Predictions and Prophecies about the End of the World.

The book was first published in 2008. A photo of an excerpt from the book has gone viral across social media platforms and is spooky enough to reach for that box of tissues to wipe your sweat.

“In around 2020 a severe pneumonia-like illness will spread throughout the globe, attacking the lungs and bronchial tubes resisting all known treatments.”―the excerpt read.

Doesn’t it sound very similar to this novel coronavirus and the disease, Covid-19? Be it the nature of the illness, the year mentioned or the part about the resistance to treatments – the similarity with coronavirus is uncanny.

The excerpt also mentioned that the illness will vanish soon after its arrival. “Almost more baffling than the illness itself will be the fact that it will suddenly vanish as quickly as it arrives, attack again ten years later and then disappear completely.”

However, Sylvia Browne gained notoriety for her claims that she could predict the future and communicate with spirits. But she was also the subject of criticism for offering the grieving parents of missing children false information.

Some Other Similar Accounts:

It’s, of course, not the first time that uncanny similarities between fiction and fact have emerged about virus outbreaks.

A novel jointly written by Robert Ludlum and Gayle Lynds in 2000 mentioned a disease called the “Acute Respiratory Distress Syndrome” (ARDS) in the book called the Hades Factor – a good three years before the Severe Acute Respiratory Syndrome (SARS) epidemic broke out in China first, and then spread globally.

Maybe it’s just another coincidence, maybe it has nothing to do with world politics and maybe it’s not the result of a secret dark science-experiment. However, it’s really very hard to believe such a coincidence that happens again and again. Isn’t it??