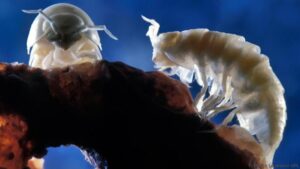 If we ever try to explain the basic definition of an Alien life, we will find that Alien life is a particular kind of life which was created and evolved in a different planet with different gravity compared to our planet Earth, and which has the different composition of atmosphere as well. To say, diversities in gravity and atmosphere of the planets make their lives totally different from each others.

Then what if we say, there’s also evolving a parallel earth somewhere in this planet for millions of years, and a number of different species are still living in there, including a few rarest alien-species that don’t exist anywhere else on this planet?? Though it seems unbelievable to hear, it’s indeed true.

In 1986, the workers of communist Romania were exploring the location in the Constanța county near the Black Sea and Bulgarian border for installation of a power plant. They suddenly stumbled across a mysterious cave beneath an infertile featureless plain of that area, which had been isolated from rest of the world for near nearly 5.5 million years when our ape-like ancestors were coming down from the trees and just began to evolve into the modern humans. Later, the cave was named the ‘Movile Cave’ by the scientists.

In their study, researchers have found the Movile Cave’s atmosphere to be highly poisonous with some harmful chemicals, preeminently with carbon dioxide and hydrogen sulphide gases that are regularly emitted from water inside the cave. There’s only 10% oxygen and no discernible source of food neither the lights in the cave’s room-atmosphere. But the researchers were totally shocked when they discovered 48 different species which were still living in there, including the 33 rarest species that exist nowhere else on this planet.

There have been found characteristically unique spiders, leeches, water scorpions, pseudo-scorpions, centipedes and woodlice each with a different biological life which have never been seen before, and all of these creatures completely rely on a mysterious and strange floating layer of bacteria to survive.

It is really amazing to think all the inhabitants of this cave were totally cut off from rest of the world for over 5 million years, it seems like a different planetary house that has been hidden on our planet since the prehistoric era.