Woods and forests are infamous for hiding the rich history of Battlefields, buried treasures, Native burial grounds, crimes, murders, hangings, suicides, cult sacrifices, and no wonder what; which make them creepy enough in their own rights.

To say, almost every forest and wood carries some legitimately terrifying histories that always represent them with different emotions and energies. Yes, walking into the woods at night can be scary, but when the woods are said to be extremely haunted, conveying the creepy legends of murder and suicide victims whose ghosts now roam the site, few dare to venture in. And it’s also true that you’ll never want to wander through one again.

In this context, we remember the name of an Indian hill forest, Dow Hill, which precisely fits in the list of the most haunted forests in the world.

Dow Hill is a small yet popular hill station located in the town of Kurseong, India. It is situated at a distance of 30 km from Darjeeling in the state of West Bengal. The town is well known for its lush green forests and picturesque landscapes. But behind its calm beauty, there is something else that makes this place infamously more popular ― the dark legends that are certainly not for the faint of heart. It is said that the Dow Hill is a beauty and a beast!

The Town Of Kurseong:

Kurseong has a pleasant climate for the entire year. In the local language, Kurseong is pronounced as “Kharsang,” which literally means “Lands of White Orchids.” Besides its beautiful vistas, orchid gardens, forested hills, and tea plantations; Dow Hill also spreads a dreadful silence all over its lands that gives this place a creepy appearance if you think.

During the cold winter months, the dense towering-trees of the hill woods let sunlight rarely seep through and a misty air that looms large, making it an ideal backdrop in a horror movie. This lonesome town is home to a death road, a headless ghost, haunted school, sinister treks, red eyes, a few real ghost stories and a number of spooky events that attract those people who are highly fascinated with the paranormal destinations.

The Cursed Hill Forest And The Ghosts Of The Haunted Dow Hill Forest: 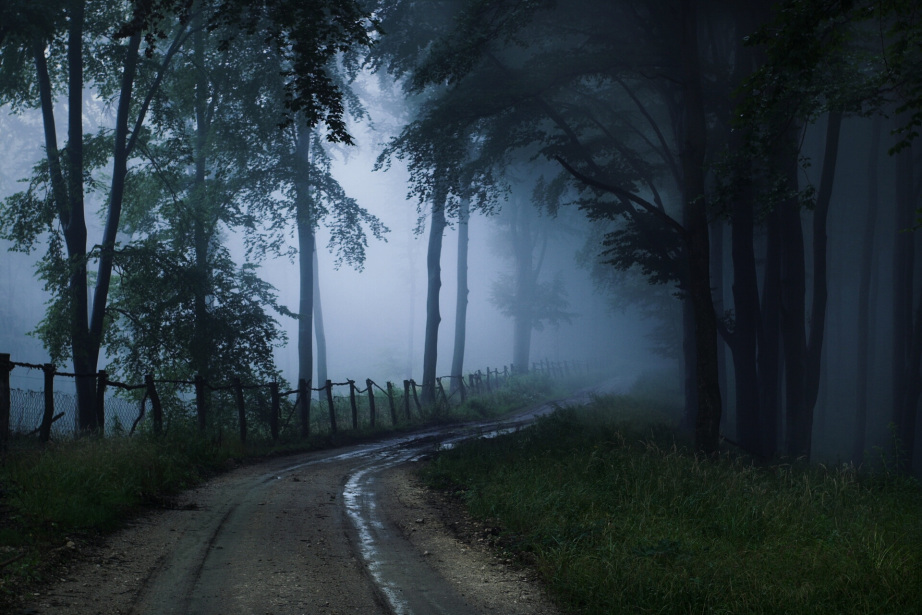 Legend has it that there is a small stretch of road in between the Dow Hill Road and the Forest office which is called the ‘death road,’ and the fainthearted should certainly avoid this spot.

The woodcutters here often report a blood-curdling sight of a young headless boy walking and disappearing into the dense woods. People have reported cases of being watched and constantly followed by someone in the forests. Some have even seen a red-eye peering at them.

There is said to roam a ghostly woman dressed in grey; and if you try to follow her, you might get lost into the dark or later see her in your dreams. It is said that the evil aura at this place has caused many unfortunate visitors to either eventually lose their mental balance, or end up committing suicide. Sometimes women screaming comes out from the dense of the trees, and children often become terrified by some unknown entities in these forests.

Close to the woods of Dow Hill, lies a century years old school named Victoria Boys High School which is said to be haunted as well. Numerous unnatural deaths seem to have taken place here in the past which are pervaded by the dark vibes of the haunted forest.

The locals have heard boys whisperings or loudly laughing in the corridors and the sound of footsteps when the school remains closed during the winter vacations from December to March. The administration has no record of these accidental or natural deaths in the region. Nobody knows if it is people’s fear, or some unsatisfied spirits that haunt this place.

If you are looking for a paranormal encounter, Dow Hill of Kurseong is where you need to be. However, ghosts or not, over the years, this place have witnessed several murders and suicides within its limits, and there have been a number of reports of visitors going missing into the dark of the forests, where all these incidents of missing people still remain unsolved. So the newcomers are strictly advised not to go into the jungle on their own.

Dow Hill has earned its reputation for being one of the most haunted locations in India. On the other hand, this small town is undoubtedly a very calm and beautiful place for spending days peacefully. Many have claimed all those haunted stories to be real whereas many of the visitors, after visiting and revisiting this hill town, found nothing ghostly there. But they all have recommended making this place one of the must-see tourist destinations in India.

Evelyn McHale: The world's 'most beautiful suicide' and the ghost of the Empire State Building