The secrets of the prehistoric Yonaguni Monument in Japan

The “Yonaguni Monument” or also known as the “Yonaguni Submarine Ruins” is a prehistoric submerged rock formation that is formed in weird large clusters up to 5 floors high and it is highly believed to be a ‘completely man-made’ artificial structure.

The terraced formations were discovered off the coast of Yonaguni Island in Japan by the divers in 1986 since it’s a popular diving location during the winter months because of its large population of hammerhead sharks.

Apart from its strange appearance, there were found some artifacts that prove the existence of people in those places. Marine geologist Masaaki Kimura from the University of the Ryūkyūs, whose group was the first to visit the formations claims that the formations are man-made complicated monoliths that are actually the ruins of a Japanese Atlantis—an ancient city sunk by an earthquake about 2,000 years ago. Whereas some even strongly believe these rock formations were man-made from the prehistoric era. If we suppose this claim, the monument structure belongs to the preglacial civilizations.

The seabed formations resembling architectural structures consist of medium to very fine sandstones and mudstones of the Early Miocene Yaeyama Group believed to have been deposited about 20 million years ago. 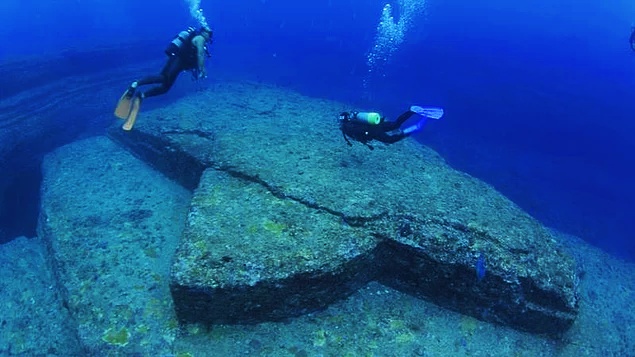 The most attractive and strange feature is a rectangularly shaped formation measuring about 150 by 40 metres and about 27 metres tall and the top is about 5 metres below the sea level. This is the largest structure that looks like a complicated, monolithic, stepped pyramid.

Some of its details are said to be:

On the other hand, some of those who have studied the formation, such as geologist Robert Schoch from the Boston University, Oceanic Geoscience Professor Patrick D. Nunn from the University of the South Pacific, suggest that it is either a completely natural formation or it was a natural rock structure that was later possibly used and modified by humans in the past.

Therefore there is a great debate about whether the “Yonaguni Submarine Ruins” is completely natural, a natural site that has been modified, or a man-made artifact. However, neither the Japanese Agency for Cultural Affairs nor the government of Okinawa Prefecture recognizes the features as an important cultural artifact and neither government agency has carried out research or preservation work on the site.

Actually, the Yonaguni Monument reminds us of another mysterious and more sensational undersea structure, The Baltic Sea Anomaly, which is believed to be a wreck of ancient alien-ship. You could read the story of this strange undersea mega-structure here.

However, if you are so fascinated with the lost undersea cities or the strange ancient structures, you could visit the Yonaguni Island. No doubt the island is bound with a lot of beautiful sea scenes, quiet nature and the historical mysteries. This 28 sq. km island is also known as Dounan in the local language, it’s located 125 km from Taiwan and 127 km from Ishigaki Island and it is the westernmost point of Japan.

To know more about the Island of Yonaguni or to explore some other attractive places on the island visit here.

The blazing curse of the 'Crying Boy' paintings!

The tragic story behind the haunted mall Klender in Jakarta

We use cookies on our website to give you the most relevant experience by remembering your preferences and repeat visits. By clicking “Accept”, you consent to the use of ALL the cookies.
Do Not Sell My Personal Info ⎋
SETTINGS ⇲ACCEPT →
Cookie Policy