Paranormal: My true experience and what I believe?

I can never explain the actual logic of paranormal and I am sure that human will never find its true explanation. We know the least and will be the same forever as we are today. Do you know why? Because we will never acquire the knowledge of everything. Till the end of our civilisation, there will be something beyond our imagination along with a slot to be called ‘Paranormal.’

You might be astonished to know that I don’t believe in ghost, nor do I believe in a demon or black magic or such kinds of occult things, because I have never experienced them in real. I was a Bengali (বাংলা) medium student (English isn’t my first language, so please excuse my any grammatical mistakes) and I was raised with science in those days. Science took most of the part of my study time, as being the favourite subject from the beginning of my highschool life. Therefore, whenever I used to think more about something, it was in my thinking system that put forth anything with a convincing logic. I still breathe in this life in trying to find out the most relevant scientific logic regarding anything strange that I learn about day by day.

I know, most (almost 90%) of the ghost stories, paranormal encounters and such supernatural phenomena are made of either misinterpretations or rumours or some kinds of psychological issues that have been absolutely explained by today’s science from every angle. But the rest 10 percent just shake me to the core everytime. That’s why I awfully love to read the unexplained stories, to hear the real paranormal experiences and to visit those places that are said to be disturbed by various strange activities. I strongly believe, there’s a some kinds of connection between all these inexplicable phenomena. One day we may have found a few from these and, in fact, it has already begun to be uncovered in this modern era.

Scientists have found the evidences that indicate the existence of dark matter, dark energy, multi-dimensions and the time warp. Some intellectuals have even theorized a number of new possibilities such as multiverse, mirror effect dimensions and so many mind-boggling things like that. So, soon it will be proven that everything which is unexplained is not a hoax.

Today we usually hesitate to show our faith in the paranormal things. Why?? Because we are the legend citizens of this internet-wifi era where everything needs a cutting-edge logic to stand up on the stage and we will watch their performance to grow our creativity. Wow! It’s a fantastic way to develop the generation. And the Smartphones! yes, this is our latest weapon to beat anything from NASA to Al-Qaeda.

We know that the first handheld mobile phone was demonstrated by John F. Mitchell and Martin Cooper of Motorola in 1973. But who was the first to give the basic concept or a prediction of mobile phone and Wifi? 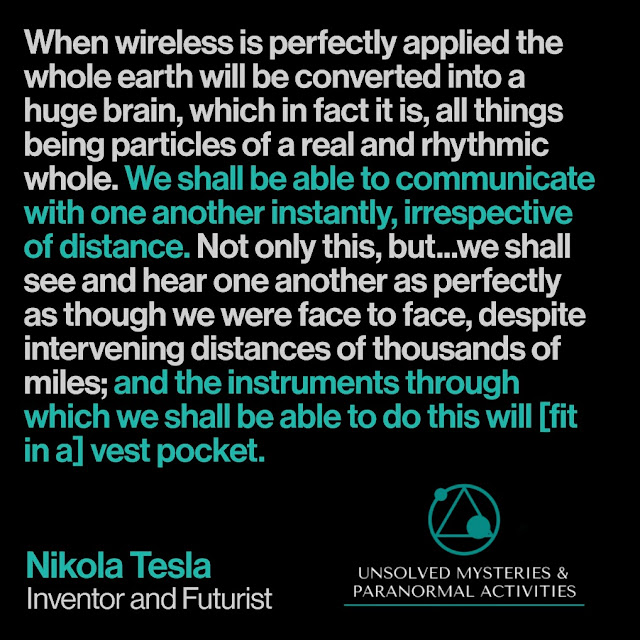 It was Nikola Tesla who basically summed up a modern smartphone and wifi in 1926, he was a pioneer scientist and a futurist during the turn of the 20th century best known for his contributions to the design of the modern alternating current (AC) electricity supply system. Sometimes he is also called the father of all electronics gadgets that have enormously powered us today. Did you know that Nikola Tesla strongly believed in paranormal entities?

Today, we often say that “Now we’re not in the dark age.” Obviously, we are not in a dark era, because in 1879, Thomas Alva Edison had gifted us the electric light bulb to lighten up our future path, and he also believed in paranormal things. Their master brains have given us today’s advanced life, nevertheless, we don’t believe in their faith accusing our today’s high-class lifestyle.

Actually, we misinterpret the term ‘Paranormal’ with the words ‘faith’ and ‘belief’. It was not their faith or belief at all, they were enough wise to understand their silly mistakes, it was their imagination and the key to open a new doorway as today’s scientists are trying to. I do believe that the term ‘Paranormal’ should be taken as a part of the higher thinking imagination which can fascinate anyone to explore deep into the unknown world, where there million-billion-trillion and more new possibilities are hidden inside.

Albert Einstein quoted two of his most inspiring lines that, “Logic will get you from A to B. Imagination will take you everywhere.” and as Werner Heisenberg said, “Not only is the Universe stranger than we think, it is stranger than we can think.” I also feel, imagination is the only way to be more creative and to open the doorway of all that new possibilities, that will simplify our understanding of the unknown.

So that, instead of ignoring, I try to perceive every story and incident of strange paranormal phenomena, because there are indeed some words in those stories, hiding the things that are beyond our imagination.

Author: Sourav Ghosh, the lead web editor and regular writer at Mysteriesrunsolved. He has a particular interest in issues relating to real mysteries, paranormal things, spiritual science and human psychology.

The ghost of a neighbour saved them from a deadly fire

The legend of Pichal Peri is not for the faint of heart!