“The Midnight Bus 375” or also known as “The Bus To Fragrant Hills” is a scary Chinese urban legend about a night bus and its horrific fate. But many believe it supposed to be based on a true incident.

The Scary Story Of The Midnight Bus 375: 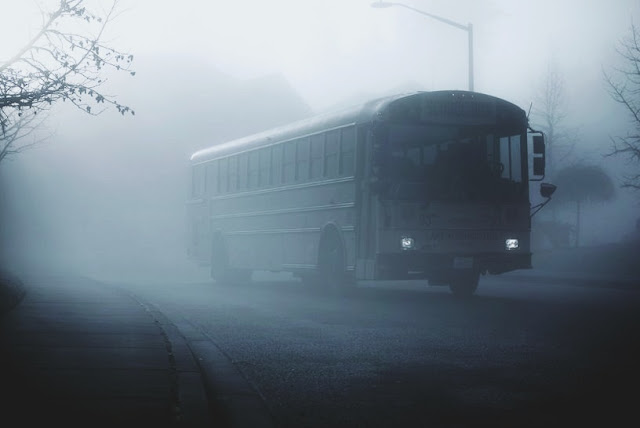 The incident happened on the bleak night of 14th November 1995, in Beijing, China. An old man – some also say an old woman – was waiting at a bus stop for the midnight bus, picking up a conversation with the only other person at the stop who was a quiet young gentleman and also waiting for the same bus.

When the midnight Bus 375 – which is the last bus for Route 375 from the Yuan-ming-huan bus terminus – finally came, they both boarded on.

The old man took a seat near the front of the bus while the young man sat a couple of rows behind him. There was no other man along with them except the driver and a decent lady ticket collector.

After a while, the driver spotted two shadows by the side of the road, waving at the bus. The driver stopped and when the doors opened, three people got on bus. There were two men who were supporting a third man between them, holding him up by his shoulders.

The man in the middle was looking dishevelled and his head was bowed, so nobody could see his face and there was a dismal calm atmosphere inside the bus.

Shortly after that, the old man picked up a fight with the young man under some silly pretext of stealing his wallet. The altercation escalated and the bus driver forced them both off the bus.

When they got off and the bus zoomed away, the old man was no longer angry and he told the young man that he had saved their lives. Because the new three passengers did not have feet and were floating, they were not the living people at all, he explained. After that, they went to the nearest police station to report this unusual thing, but nobody believed them.

But the very next day, the bus company issued a statement saying, “Last night, the final bus for Route 375 has vanished along with the driver and ticket lady.” The police immediately chased down that old man and the young man who were assumed to be mentally ill when they tried to raise the alarm earlier, and they were both interviewed on the news.

On the third day, the police revealed the allegedly missing bus 375 to be immersed in a water reservoir about 100 km away from its destination, Xiang-shan aka Fragrant Hills.

The Mysterious Circumstances Behind The Midnight Bus 375 Incident:

Inside the bus, there were three very badly decomposed corpses, and the mysteries surround this finding include:

This urban legend has a number of versions of the sequences and it was the most popular of them. However, the urban legend may have been based on a true story that could be related to a strange paranormal event, as well as it might be related to a real case of murder in Beijing.
Facebook Twitter Pinterest LinkedIn