The Superstition Mountains, a range of mountains with natural beauties located in the east of Phoenix, Arizona, in United States, which is mostly famed for the strange occurrences since more than a century years ago including the old legend of the Lost Dutchman’s Gold Mine. 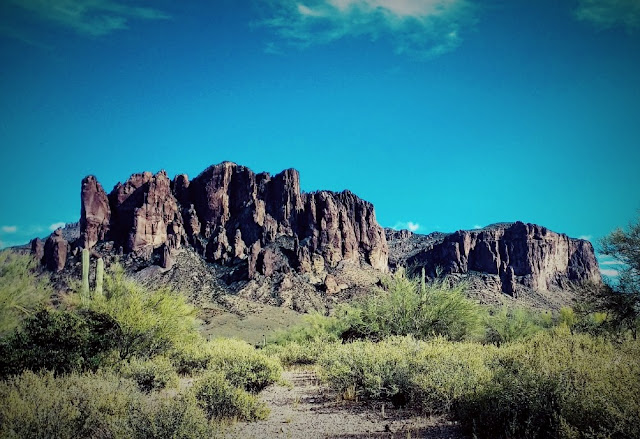 According to a legend, in the 19th century, a German man, Jacob Waltz (c. 1810-1891), discovered a huge goldmine within these mountains that has since been turned into the name of “Lost Dutchman’s Gold Mine”. Actually, the American people commonly used the term “Dutchman” to call the “Germans” who were also known as “Deutsch”.

It is said that Waltz kept secret the location of the gold mine after finding it and being rich enough from it. Later, he relocated to Arizona in the 1860s and stayed in the territory for most of the rest of his life. Eventually, a catastrophic flood once had come in Phoenix in 1891, and Waltz’s farm was one of many that was devastated by the flood. Afterwards, Waltz fell ill perhaps with pneumonia and died on October 25, 1891, after having been nursed by a lady named Julia Thomas. Waltz was buried in Phoenix’s Pioneer and Military Memorial Park. During his death, Waltz is said to make a deathbed confession to Thomas and he draws or describes a crude map to the gold mine.

As early as September 1, 1892, The Arizona Enterprise went in search of the mine on the efforts of Thomas and several others, but the expedition was unsuccessful. After that, hopeless Thomas and her partners had sold the maps to the mine for $7 each.

Several fascinating versions of the legend of “Lost Dutchman’s Gold Mine” have been put forth and here it was the most popular version among them.

In yet another version of the tale, two U.S. Army soldiers are said to have discovered a vein of almost pure gold inside or near the Superstition Mountains. The soldiers are alleged to have brought up some of the gold, but they vanished soon after, most probably they were killed in some way.

In the summer of 1931, an amateur treasure hunter Adolph Ruth disappeared while searching for the gold mine. After its six months, his skeleton was found with two bullet holes in his skull and the story made enough publicity by the national news to sparking widespread interest in the Lost Dutchman’s Gold Mine.

Since Ruth’s death, there have occurred several other deaths, disappearances, wilderness accidents and macabre events in the Superstition Mountains.

• In the mid-1940s, the headless remains of prospector James A. Cravey were reportedly found in the Mountains area. He was allegedly disappeared after setting out to find the Lost Dutchman’s Gold Mine.

• In late November or early December of 2009, a Colorado resident Jesse Capen (age of 35) went missing mysteriously in the Tonto National Forest. His campsite tent and car were found abandoned shortly afterwards. He was known to have been trying to expose the secret of the Lost Dutchman’s Gold Mine for several years and had made previous trips to the area. Later in 2012, Capen’s body was discovered by a local search and rescue organization.

• On July 11, 2010, Utah hikers Curtis Merworth (age of 49), Ardean Charles (age of 66), and Malcolm Meeks (age of 41) went missing in the Superstition Mountains questing for the gold mine. On July 19, the Maricopa County Sheriff’s Department carried out a wide investigation into this mountains site for the three lost hikers. They presumably died in the summer heat. In January 2011, three sets of remains were recovered from that area which is believed to be of those lost men.

Now, a few people believe the spirits of all those dead guys still haunt this mountains-area and they are the actual reasons behind all the macabre events that often occur in the Superstition Mountains.