Back in 2003, a Chilean man named Oscar Muñoz found a strange miniature skeleton called Ata, near an old church in the deserted town of La Noria, located in the Atacama Desert. 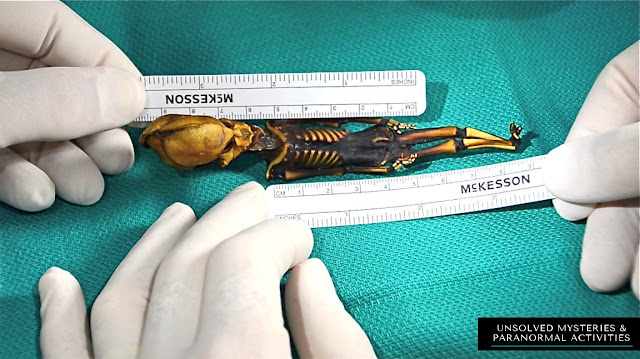 The 15cm long structure appears to be a complete human skeleton, and the primary DNA analyses indicated that it was a female human body. There are many theories about Ata’s mutation, size and shape. Most of them suggest that Ata was a human fetus born too prematurely for survival, whereas other theories suggest that the skeleton is the remains of an alien. Scientists conducted tons of studies and exams on Ata, but they still haven’t figured out the whole mystery surrounding this strange miniature skeleton.

The recent studies state that the fetus had a rare bone ageing disorder, as well as other genetic mutations in genes associated with dwarfism, scoliosis, and abnormalities in the muscles and skeleton. The researchers have identified 64 unusual mutations in 7 genes linked to the skeletal system, and they noted to find various mutations that specifically affect skeletal development have never been reported before.

Nowadays, the remains have been placed in a private collection in Spain, and the current owner is Ramón Navia-Osorio, a Spanish businessman, who had bought this peculiar piece from Oscar Muñoz.