A brief history of ‘strange signals’ coming from deep in space

Since the dawn of civilization, humans have witnessed such unusual and unexplained activities that are widely believed to have been coming from another world, boasting advanced intelligent beings. From the prehistoric cave-arts to today’s science-gallery, there are tons of things whose exact reasons and origins are still unknown, and the most controversial topic of them is the “strange signals coming from deep space” that, according to many people, could be the real evidence of advanced extraterrestrial life.

Cornell physicists Philip Morrison and Giuseppe Cocconi had speculated in a 1959-research paper that any extraterrestrial civilization attempting to communicate via radio signals might do so using a frequency of 1420 megahertz (21 centimetres), which is assuredly emitted by the most common element in Universe, Hydrogen; and it should be familiar to all technologically advanced or intelligent beings.

Strange Signals Picked Up From Arecibo:

A few years later in 1968, there were several reports of unidentified signals from space that were picked up from the Arecibo radio telescope in Puerto Rico. There could be found a number of news-articles from 1968 where these strange signals were mentioned as some probable evidence of the existence of advanced extraterrestrial beings. At that time, Dr. Frank Donald Drake who is famous for his eponymous equation (Drake Equation) for the probability of extraterrestrial life, took his keen interest in these strange signal phenomena.

Five years later in 1973, after completing an extensive survey of extragalactic radio sources, Ohio State University assigned the now-defunct Ohio State University Radio Observatory or aka “The Big Ear” (then located near the Perkins Observatory in Delaware, Ohio, United States) to the scientific search for extraterrestrial intelligence (SETI). It was the longest-running program of its kind in history.

Next year, Dr. Drake imagined a step ahead and miraculously created a message with the help from Carl Sagan, which is popularly known as “The Arecibo Message”, an interstellar radio message carrying basic information about humanity and Earth sent to globular star cluster M13 galaxy in the hope that extraterrestrial intelligence might receive and decipher it.

“The Arecibo Message” consists of seven parts that encode the following (from the top down):

On November 16, 1974, at a special ceremony to mark the remodelling of the Arecibo radio telescope in Puerto Rico, the message was broadcast into space a single time via radio waves.

On August 15, 1977, The Big Ear radio telescope of Ohio State University received a strong narrowband radio signal which was later used to support the search for extraterrestrial intelligence. The signal appeared to come from the constellation Sagittarius and bore the expected hallmarks of extraterrestrial origin. The radio signal lasted for only 72 seconds and it was never heard again.

Astronomer and a SETI researcher, Jerry R. Ehman, discovered this anomaly a few days later while reviewing the previously recorded data. He was so surprised by the result that he circled the reading (6EQUJ5) on the computer printout and wrote the comment Wow! on its side, leading to the event’s widely used name. Two different values for the Wow! signal’s frequency has been given: 1420.36 MHz by J. D. Kraus and 1420.46 MHz by Jerry R. Ehman, both of which are very close to the value of 1420.41 MHz of the hydrogen line, as predicted by Morrison and Cocconi. 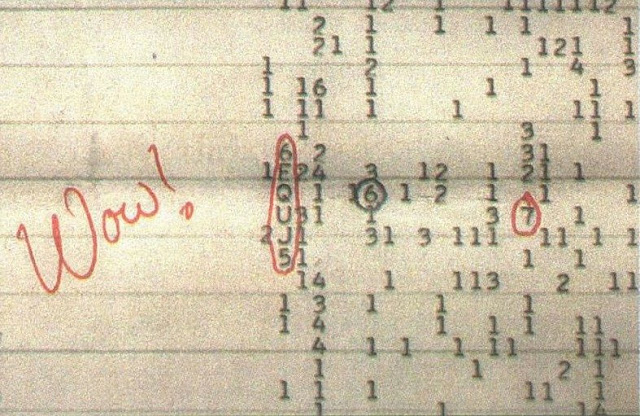 The Wow! signal is considered to be one of the most mysterious astronomical phenomena which many people believe to convey a communication message from Extraterrestrial Intelligence. Whereas a team of researchers with the Center of Planetary Science (CPS) has straightly confirmed in their new 2017 research paper that this mystical signal was actually generated by a comet.

27 years later of sending “The Arecibo Message,” in 2001, the crop circle phenomenon gained some well-deserved attention when a pattern in the form of a response to the 1974 broadcast appeared right next to Britain’s largest telescope, the Chilbolton, and observatory, home to the world’s largest fully steerable meteorological radar. It’s one of the most amazing crop circles to ever appear, regardless of whether you believe it was done by human beings or extraterrestrial intelligence.

Above is a picture of what seems to be a response to the message sent out in 1974 by NASA (you could also see the first image of this post for clear observation). The message describes a different solar system, an image of the sender just like on the original NASA’s Arecibo message, non-human DNA, and a microwave antenna instead of the radio-wave antenna depicted in ours.

The face you see there appeared three days before the rectangular image. The face represented a new technique in crop circle generation, a screening technique that is also used for printing a face on a piece of paper. Although the mainstream scientists believe it to be written off as a hoax, like most crop circles are within.

Not many people are aware of the fact that crop circles occur all over the world and for decades there are thousands of reports regarding the unexplained crop circle phenomena. Some of their designs are so complex and elaborate that they’ve completely baffled onlookers, researchers, and scientists alike.

Not only that, but many of the designs are also often electrostatically charged, usually with the nodes of some of the plant stalks blasted out on one side. Some of them are also littered with strange magnetic particles. This effect has been replicated by highly localized microwave heating, which causes the water inside those plants to be vaporized and dislodged, thus flopping the stock completely over to one side.

This fact has led some physicists to do some more research on these phenomena, concluding that the perpetrators (who have never been caught in the act of making a crop circle, anywhere) are using GPS devices, lasers, and microwaves to create these startling geometric forms.

Since 2007, researchers have been astonishingly observing another strange signal or sound called Fast Radio Burst (FRB) that comes from outside our own galaxy repeatedly. Fast Radio Bursts are named by the date the signal was recorded, as “FRB YYMMDD”. The first fast radio burst to be described, the Lorimer Burst FRB 010724, was identified in 2007 in archived data recorded by the Parkes Observatory on 24 July 2001.

There are more than 150 evidential reports of Fast Radio Bursts till to this date but experts are no closer to finding out exactly what it is – or where it comes from. To put it simply, the signal discovery is similar to hear a loud bang and then turning around and finding nothing. The Stargazers are left without any clues and have no idea of the direction the sound came from.

There are theories that the bursts come from massive neutron stars emitting huge rays, called pulsars, or they could be emanating from black holes or rotating neutron stars with extremely strong magnetic fields. Whereas, Harvard researchers have suggested that these FRB are caused by alien space travel or advanced alien technology. But there’s hope that it could be alien life trying to get in contact.

On May 12, 2017, researchers at Arecibo Observatory had observed mysterious signals coming from Ross 128, a red dwarf star located about 11 light-years away from Earth. The star is about 2,800 times dimmer than the sun and not yet known to have any planets, and it’s the 15th closest star to the Sun.

According to the reports, the star was observed for ten minutes, during which time the wide-band radio signal was “almost periodic” and decreased in frequency. No such signals were detected in further follow-up studies by Arecibo, whereas some have suggested that the signals were actually made from radio frequency interference from an artificial satellite orbiting the Earth, and the debate continues.

Strange Signal That Repeats On Every 16.35 Days:

A group of Canadian researchers has recently detected a mysterious radio signal coming from a galaxy located 500 million light-years away that repeats regularly at an interval of 16.35 days. And no one knows still for sure what is causing them.

In such unusual cases, under mysterious circumstances, taking everything from a typical point of view is our birth trait. In this way, we basically try to convince others and sometimes ourselves. So, what do you think of these strange outer space signal phenomena?? Feel free to share your valuable opinions in the comment box below.

The hauntings of the Jenny Dixon beach