Santiago Flight 513, a Commercial Airliner that takes off in Germany in 1954, and lands in Brazil in 1989 with 92 skeletons on board ― with the dead pilot still at controls.

For the first time, it seems to be beyond science fiction, but for some years, this miraculous story has been circulating on the internet with various eye-catching headlines such as, “Pan American Flight 914 took off in 1955 but landed after 37 years” or “DC 4 aircraft disappeared in 1955, landed after 37 years” or “1950s Airliner lands with 92 skeletons,” or “Lost Plane Found After 37 Years!” describing nearly the same incident.

Outcome Of The Story Of Missing Santiago Flight 513:

Actually, this extraordinary story was first published as breathtaking news by “The Weekly World News Tabloid, 14 Nov 1989 Edition.” Where the report of a newspaper reporter, Irwin Fisher confirms the sketchy details that surround the missing Santigo flight 513. Is it a piece of conclusive news or it was just a sensational hoax??

What Actually Happened To The Missing Santiago Flight 513 On Its Way From Germany To Brazil:

According to Brazilian aviation authorities, a commercial airliner named “Santiago flight 513” took off from Germany on September 4th, 1954 and vanished somewhere over the Atlantic ocean. A fruitless massive-search was conducted and the investigators were finally forced to believe that the aircraft was crashed and all the passengers had lost their lives in this tragic event.

Here’s What Makes The Story Of The Missing Santiago Flight 513 Even More Stranger:

The story becomes even more fascinating when the missing flight allegedly reappears and circles the Airport of Porto Alegre, Brazil on October 12th, 1989, and lands with 92 skeletons on board!!

The authority said that the control tower had no communication with the missing plane that apparently circled the airport area then landed. After going to check the plane, upon opening the doors, airport support and security were absolutely shocked to discover 92 skeletonized bodies including of all 88 passengers and 4 crew members sitting in their seats. The more strange scene was that of the skeletonized pilot, Captain Miguel Victor Cury, who was sitting in the intact position and was still apparently clutching the controls. They also noted that the plane was still idling!

But strangely, officials had refused to comment on reappearance of the missing flight 513. They didn’t conclude where the plane had been for the intervening 35 years!

Did The Santiago Flight 513 Enter A Time Warp? 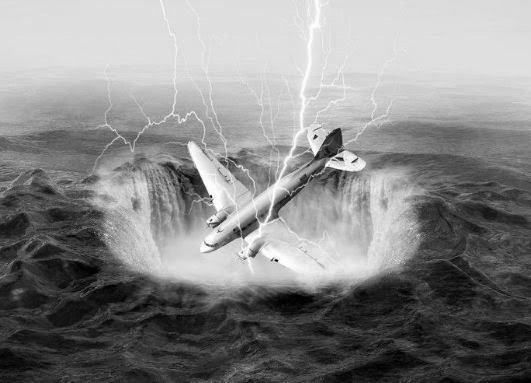 Dr. Celso Atello, a paranormal researcher, said that the Santiago flight 513 had almost certainly entered a time warp, there is no other explanation. But he doesn’t seem to have had an explanation as to how the skeleton of the pilot managed to land the plane safely.

What Was The Government & Flight Authorities’ Response To This Weird Claim:

Santiago Airlines apparently went out of business in 1956 and their executives who are still alive didn’t know much about the flight to comment.

Despite the government agents had extensively investigated this strange event, they refused to discuss anything about the plane or about their investigation leads. They also refused to comment on Dr. Atello’s words that the plane had entered a time warp―that’s the only explanation. And the government has never come out with any particular interpretation.

Therefore, it is strongly believed that the government officials have hushed up this case, they have cleared all the evidence that time warp does really exist and they don’t want to scare us.

However, there have been numerous such reports of pilots losing time miraculously, of people being teleported from one side to another, thousands of miles within seconds without any rational explanation at all.

Here’s What We Actually Found About The Missing Santiago Flight 513:

We first searched on Wikipedia for this peculiar story, since there’s enough information about all the lost and crashed aircraft chronologically. But we didn’t find there anything about the missing “Santiago Flight 513,” or about the disappearances of “Pan American Flight 914” and “DC 4 Aircraft,” nor we found any other reliable source backing this sensational news-story.

However, if this engrossing story was not a mere hoax ― which is more likely to be in this case; due to lack of proper evidence except for the one and only piece of the tabloid or newspaper that is not precisely verified at all ― and was based on a real event or on some other similar incident then the question definitely comes to our mind, “what really happened to the allegedly missing Santiago Flight 513??”

Is It Possible To Go Through Such Time Warp And Again Come Back?

In this world, there are hundreds of places where aircraft, ships, boats or even people go missing without any traces. Many intellectuals believe that those places unpredictably create some kinds of time portals called Vortex.

Vortex is said to be a result of the parallel universe. According to this theory, Vortex opens on another world―a parallel world consists of anti-matter and that can absorb people, masses or even light and time. To say, people gone missing in this world actually reach another world within seconds. In this world, there are such many places but especially the Bermuda Triangle, the Devil’s Sea Zone and the Michigan Triangle are the ones that notoriously famous for such unexplained disappearances and unusual incidents. To know more about vortex and the Earth’s time portal zones, read this article.

The Strange Case Of Bruce Gernon – A Survivor of the Deadly Bermuda Triangle:

For centuries, Bermuda Triangle has earned enough infamy for missing ships, people and aircraft without any proper explanation. Whoever had disappeared from this triangle zone has never returned again to tell the story. But there’s one man named Bruce Gernon who, according to his claim, once did the impossible in the real-life. Gernon is the only Survivor of the Bermuda Triangle death zone to uncover its story.

Many others have also seen parts of this phenomenon of mystery and disappearance but Gernon has seen it completely. He witnesses this from its birth stage through its mature stage and enters the heart of the Time-storm and escape through a Tunnel of Vortex and experience a time warp.

Bruce Gernon claims that on December 4, 1970, he flew a Beech Bonanza from Andros Airport, Bahamas, to Palm Beach, Florida – 250 miles – in only 47 minutes. It requires a speed of 500kmph consistently. For his small private plane, it was impossible. Gernon and his daughter Rob McGregor were on this flight.

He saw a thick extensive layer of extremely white fog that was coming to them. At that time, his plane’s connection with the control center went lost as well as the compass and other aircraft devices were not working at all. These happened all at once.

In this situation, he daringly decided to accelerate the plane to the pile of fog to get through it. As they entered the cluster, the air became denser and within a short time the plane was completely enveloped by the cloud and visibility was reduced to 7 or 8 kilometres. There was no lightning or rain, but there were white flashes that illuminated the sky, and although Gernon rose to approximately 3000 metres of altitude, he could not get out of the cluster.

READ:  The Tragic Murder Of Flávia Mafra: Her Unborn Child Was Cut Out Of Her Womb!

After a few seconds, Gernon realized that the plane was trapped in the middle of a deadly cloud cluster. He was even unable to know if his plane was heading to earth or moon. Right then, he saw a huge tunnel, at least 50 km in diameter, through the strange thick clouds. The visibility into the tunnel was so clear that he could see miles away through it.

In this “do or die” situation, Grenon took the risk and entered into the tunnel. Approaching the opening, he realized that it was a perfectly horizontal tunnel, just over a kilometre long, and that he could see the blue sky on the other side. Bruce decided to head towards the sky, while remaining surprised by the strange density of the air and the cottony appearance of these clouds, he began to accelerate towards the exit.

After exiting the strange fog he noticed that 30 minutes had passed and he travelled 100 miles in just a short time in the vortex. It is only after 31 years of his complete research on the triangle did Bruce Gernon discover how he had flown those 100 miles in such a short time and never seen the Earth or sky around him.

He further claims it’s because of something called “electronic fog.” It is said that Bruce was captured by the electronic fog where in which there have been dozens of planes and boats too which went missing in this fog throughout history.

Gernon believes that a rare natural phenomenon may be behind paranormal happenings in the Triangle. Ufologists and the ancient astronaut theorists assert that the Bruce Gernon’s story of Electronic Fog also explores the Bermuda Triangle’s connection to UFOs, a secret navy base and a possible link to a vanished ancient civilizations.

After learning about “The Missing Santiago Flight 513 That Landed After 35 Years With 92 Skeletons On Board,” read about “What Happened To The Stolen American Airlines Boeing 727??” Then, read about “Some Of The Most Infamous Bermuda Triangle Incidents.”