In the early 1900s, there lived a little boy named Robert Eugene Otto or shortly called ‘Gene’ in the Otto Family in Key West, United States, who got a strange straw-filled doll from one of their family maids to play with. He was only 4-year-old at the time.

Day by day, little Gene showed an immense love to his life-sized doll and liked to bring it along everywhere, even naming it ‘Robert’ after himself. It was not so long, however, before people begin to notice the signs of Robert the Doll’s evil and mischievous nature. 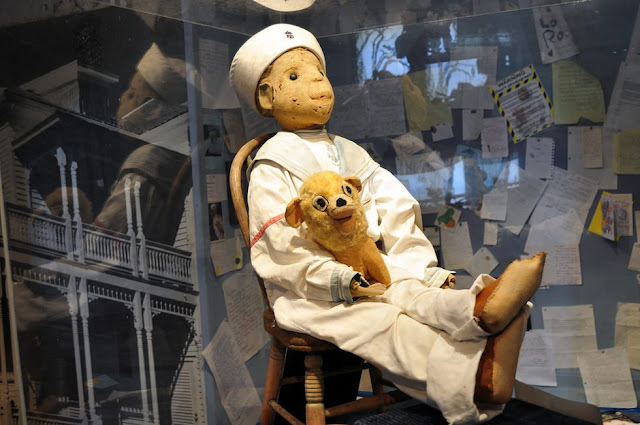 As rumour has it that the Otto family members and their servants would often hear Gene in his bedroom, having conversations with himself in two entirely different voices which spooked them out so much. To make things more strange, the Ottos would wake up in the midnight hours to screaming from Gene’s bedroom, only to find him terrified in bed, surrounded by scattered and overturned furniture. Gene would blame Robert the Doll for all those awkward messing, while Robert would glare at him from the foot of his bed.

Soon after, strange happenings such as unrecognised voices and mutilated toys would appear in the home, and Gene asserts each time, “Robert did it!”. Though the Ottos thought these were all mischievously done by Gene, it is said that they could ocationally hear the eerie giggling-sound of Robert from everywhere of the mansion. The passersby used to claim to see a small doll peering and moving from window to window when the family went somewhere else, as well as some visitors to the house would even describe how the doll’s facial expression changed according to the conversation in the room. Eventually, the Otto family moved the fearful doll ‘Robert’ to the attic where he remained for a few years.

After the death of Gene’s parents, he inherits their Key West Mansion and returned back there with his bride Anne, at which time Robert the Doll comes again in his old bedroom on the second floor of that mansion, known as  Gene’s turret room. By then, Gene started working as an artist, and local folklore insists he would often spend his time alone in the home, painting with his old childhood friend Robert. But Anne always despised the doll utterly and after her husband’s death she demanded to keep the doll in a cedar chest forever, and some local stories say that Anne gradually dies from ‘insanity’ after locking Robert in the attic. A few years after her death the spooky Robert The Haunted Doll was found again and was donated to the Key West Art and Historical Society.

Today, Gene’s Key West Mansion operates a bed and breakfast called the Artist House, and the visitors could even stay in that Gene’s old turret bedroom, whereas Robert the Haunted Doll now lives at the Fort East Martello Museum in Key West, along with his teddy bear, and some believe his hair colour and soul are both gradually fading.

Wait, the story is not ending yet!

Obviously, Robert still has some mischievous acts and his current favourite act involves casting curses on those visitors who take his photo without first asking permission. To this date, the walls near his glass case can be seen covered in numerous letters and words from the previous visitors and naysayers, begging for Robert’s forgiveness and asking him to dispel any hex he has cast. So, beware before you mess up with Robert the Haunted Doll..!!