bySeig Lu
Total
22
Shares
18
0
4
A medical condition called Ainhum or also known as Dactylolysis Spontanea where a person’s toe just randomly falls off in a painful experience by bilateral spontaneous autoamputation within a few years or months, and doctors have no clear conclusion why it actually happens. 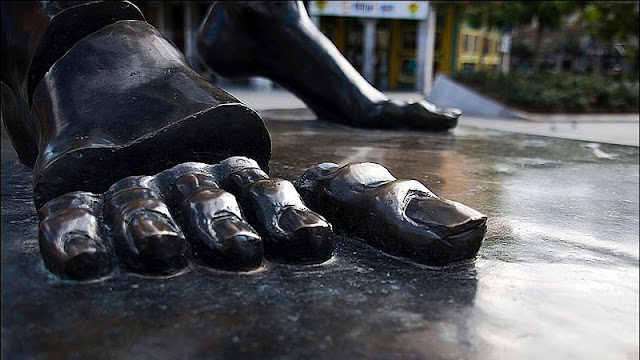 An English surgeon named Robert Clarke first described this strange and bizarre disease in an 1860 report to the Epidemiological Society of London, but he did not recognize it as a distinct entity and conceived it to be a consequence of “Suppressed Yaws,” which is a tropical infection of the skin, bones and joints caused by a bacteria. Then in 1867, Ainhum was first recognized as a distinct disease and described as such in detail by the Brazilian physician Jose Francisco da Silva Lima.

At first, the groove begins on the lower and internal side of the base of the fifth toe of both feet (in about 75 percent cases), becomes gradually deeper and more circular, progressing with slight pain, and the whole process could take a few months to a few years until the last stage of autoamputation occurs. And all the cases of Ainhum disease have been reported to begin in the fifth toe of the foot.

The actual reason for this bizarre disease remains unclear. Various tests have unveiled that Ainhum is not due to infection by parasites, fungi, bacteria or virus, and it is not related to injury. Some reports say that walking barefoot in childhood might be linked to this disease, but it also occurs in those patients who have never gone barefoot. On the other hand, race seems to be one of the most rational factors and it may have a genetic component, since the most cases of Ainhum have been reported to occur within families, and a genetically caused abnormality of the blood supply to the foot has also been suggested.
Excision of the groove followed by z-plasty or treated with disarticulating the metatarsophalangeal joint with intralesional injection of corticosteroids could relieve pain and prevent the autoamputation process.

In the maximum cases, Ainhum or Dactylolysis Spontanea has been confused with near similar constrictions caused by other diseases such as leprosy, diabeticgangrene, scleroderma or Vohwinkel syndrome, syringomyelia. In this case, it is called Pseudo-Ainhum which is treatable with minor surgery or the treatments as with Ainhum. Pseudo-Ainhum has even been seen in psoriasis or it is acquired by the wrapping toes, penis or nipple with hairs, threads or fibers. [source]

The hauntings of the Jenny Dixon beach