The spooky tales behind the Bachelor’s Grove cemetery

Rumoured to be a gangster’s favourite dumping ground during prohibition, Bachelor’s situated in the southwest Chicago suburbs is a decaying century-old cemetery that has gained enough reputation for hosting a number of strange and bizarre stories about ghosts, spirits and devil-worshipping. Of which, the most famous is the ghost of a White Lady, a young woman wearing a white dress, who appears on the moonlit nights, cradling a baby in her arms. 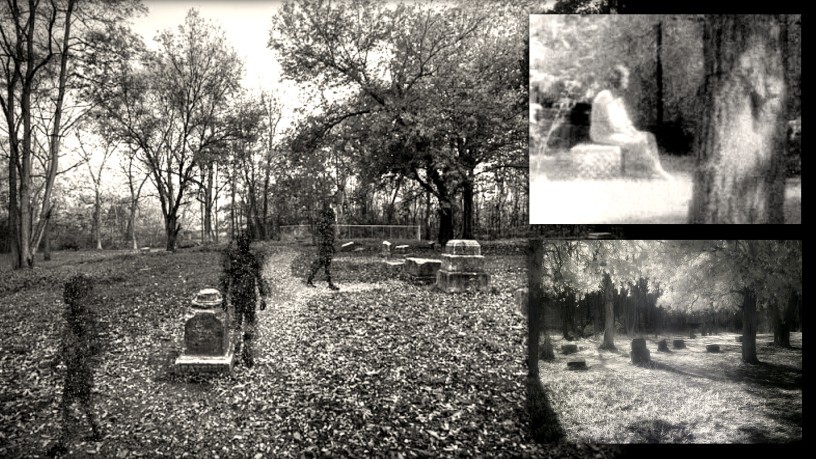 In the 1920s, there were found numerous dead bodies in the small lagoon near the cemetery. Since then, these spooky affairs began to occur, and in the late 60s, it was turned into a very commonplace used for satanic worshiping and ocult practices.

Once the Ghost Research Society investigated the cemetery site. According to them, they got notable changes in their electromagnetic readings taken from the same spot at different times. They took a few photographs with their normal and infrared cameras and nothing was seen by the time of snapping the photos. But after development, they were shocked to find a brown-haired woman in a long dress, sitting on the checkerboard tombstone of an old cemetery in one of the photographs.

If you take a closer look at this image, you can see a woman’s figure which is looking semi-transparent especially to her head and legs.

Many people, who have visited this graveyard to investigate or to explore its quiet beauty, have claimed that the fully charged batteries of their electronic gadgets were dramatically drained out, as well as their car-engine had stopped without any known reasons and it started again after a while.

The most famous ghost sighting story is the Blinking of a Blue Ball. In 1970, a man named Jack Harmanshki observed a blue light hovering over the ground, and that whole night he tried to catch it but the light was playing a tricky game with him. Whenever he had overtaken it, the light disappeared and reappeared behind him after every 20 seconds of interval.

Later in December 1971, a woman by the name of Denise Travers, who had recently visited the graveyard, claimed that she was able to touch the mysterious light which was constantly moving here and there and it had a heat sensation.

Another fascinating story about a Phantom House is also heard. A white farm style house with a white wooden column, a porch swing and even a dimly burning lantern has been seen by many during the nighttime. When they try to get into the house or approach towards it, to everyone’s surprise, the house disappears into the dark woods by gradually making itself smaller than smaller.

Not only the Phantom House, but also the Phantom Car that has often been witnessed in the Bachelor’s Grove Cemetery area. But whenever the car was chased, it vanished into the thin air to be never found again. It seems as if the car suddenly appears and disappears in the dense trees.

In 1970, two Cook Country Forest Rangers, on late-night patrol, encountered another creepy incident besides the lagoon. They saw a farmer and his horses pulling an old plow and suddenly vanished in a fraction of time.

The two-headed monster crawling story is also a very old legend of the Bachelor’s Grove Cemetery. Legend has it that the monster comes out from the lagoon and disappears in the nearby Rubio Woods Forest Preserve.

Another legend says, there is a deadly hooks-spirit in the cemetery area who always tends to kill its witnesses.

In 1975, according to a first-hand witness, an Instamatic camera got some pictures of human-like mist without the shutter button being pressed. That man sent his camera to the technician and he was told that the camera is in fully functional condition and the film was new. Apart from these, some strange voices have been recorded in the cemetery over the years. These voices are very scary that simply say “HELLO BLACKMAN, MINNA MINNA!!”

Although there are so many weird and mysterious stories linked to the Bachelor’s Grove Cemetery, this is indeed a perfect place for the ghost hunters and mystery seekers that will definitely add a new experience to their haunted tour.

A 'brass bell' claimed to be 300 million-year-old!