The world is full of ancient mysteries, leaving behind thousands of unanswered questions, and one of them is significantly located in Jordan, the home to the famed archaeological site of Petra which was the Nabatean capital dating back to around 300 B.C.

By using aerial photography, archaeologists mapped out a strange 150-km-long short heightened and wide width ruined wall across the deserted valley of Jordan, and today it is popularly known as the “Khatt Shebib.” 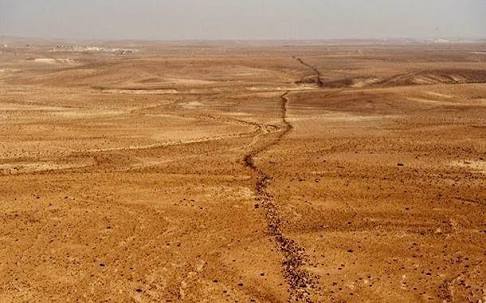 The appearance of the Khatt Shebib stone-wall indicates that probably it wasn’t made for a defensive purpose. This mystery wall in Jordan was first reported in 1948, and since then, a lot of efforts have been made for but the archaeologists are still not so sure why and when the Wall of Khatt Shebib was built, or who actually built this weird ancient structure.

The Khatt Shebib wall is expanded from north-northeast to south-southwest and contains sections in some locations where two walls go along together side by side, as well as sections where the wall branches off.

In the present days, the wall is in its ruin condition, but in its time, the wall would have been stand about 3.3 feet high and just 1.6 feet wide, which is indicating that perhaps the Khatt Shebib wasn’t built to keep protected from the army of the invaders.

However, the Khatt Shebib wall may have been built to keep out less threatening enemies such as hungry goats or other less harmful animals.

According to the archaeologists of Aerial Archaeology in Jordan project, the existence of ancient agriculture to the west of the Khatt Shebib wall indicates that the mysterious structure may have served as a boundary between ancient farmlands and the pastures of nomadic farmers.

Mystery or not, like the other amazing historical sites, the Khatt Shebib is also a wonderful attraction for the archaeological tour of Jordan. So if you love to visit such historical places, you could put this beautiful archaeological site on your must-see list.