Between 1947 and 1956, several ancient religious scripts written in the Hebrew language were found at Qumran, Westbank, in Israel. The scripts are widely known as the Dead Sea Scrolls. Among these scripts, the most different and strangest one is ‘The Copper Scroll’ which was found in the Cave-3. This scroll is believed to be the oldest man-created biblical script to this date.

One the other hand, the Copper Scroll is the only existing ancient script that was crafted on metal (copper-sheet) rather than on parchment (skin) or papyrus and it is now on display at the Jordan Museum in Amman. The most interesting side of this historical scroll is that most of the parts in its script is still enigmatic to the mainstream archaeologists.

The Lost Treasure Of The Copper Scroll:

In 1956, when the English archaeologist John M. Allegro had first deciphered this script, he revealed that it was some kind of enigmatic list, containing the secret locations of hidden treasures instead of being just a religious manuscript. There’re mentions of such 64 places where there will be treasures worth of near about 200 billion dollars in today’s economy.

“Forty-two talents lie under the stairs in the salt pit … Sixty-five bars of gold lie on the third terrace in the cave of the old Washers House … Seventy talents of silver are enclosed in wooden vessels that are in the cistern of a burial chamber in Matia’s courtyard. Fifteen cubits from the front of the eastern gates, lies a cistern. The ten talents lie in the canal of the cistern … Six silver bars are located at the sharp edge of the rock which is under the eastern wall in the cistern. The cistern’s entrance is under the large paving stone threshold. Dig down four cubits in the northern corner of the pool that is east of Kohlit. There will be twenty-two talents of silver coins.” ―(DSS 3Q15, col. II, translation by Hack and Carey.)

Many believe the Copper Scroll was crafted and brought from Jerusalem since there is mention of “The House of God” several times in its scripts. And many have spent their lives trying to find the lost treasure in Jerusalem but it has never been found. Maybe the lost treasure of the Copper Scroll is still hidden somewhere in Jerusalem or maybe it is lying in another secret part of this world.

Archaeologist Robert Feather And The Secret Of The Copper Scroll:

The renowned archaeologist and metallurgist Robert Feather has been researching on the Dead Sea Copper Scroll for several decades. He is the founding editor of “The Metallurgist,” editor of “Weighing and Measuring,” and the author of “The Mystery of the Copper Scroll of Qumran” and “The Secret Initiation of Jesus at Qumran.”

Mr. Feather has revealed that the Copper Scroll actually didn’t come from Israel because Israeli didn’t measure gold in ‘Kilo’, and with his in-depth observations, he significantly found 14 Greek letters in various lines of the script, indicating it wasn’t created in Israel.

According to him, the script sheet is made of 99.9% pure copper which is found in only one place of this world, and that is Egypt. Therefore, Mr. Feather believes the Copper Scroll was not actually crafted in Jerusalem, it somehow came from Egypt that is 1000 km away from where it was discovered in Israel.

Later, when it was better analyzed, some Egyptian words such as ‘Nahal’, ‘Haktag,’ etc. were found each of which literally means the “big river.” But the fact that Jerusalem or so-called ‘Zurya’ in that time had no rivers in it. On the other side, there was only the one river of which name has been taken again and again in history, that is “The Nile” located in Egypt.

To make things more strange, Mr. Feather discovered that the beginning 10 Greek letters found in the script secretly convey the name ‘Akhenaten’. And he realized the Copper Scroll was actually telling about an ancient Egyptian-city called ‘Amarna‘ which was the capital of Pharaoh Akhenaten in its time.

The Aten Era In Egypt:

It is believed that Akhenaten was the only infidel pharaoh in Egypt who had denied all the gods, saying “God is one and that is Aten,” which means the ‘Sun’ in the Greek language. Ancient historians believe that ‘Aten’ was not just a symbolic god, he was the only god whom Akhenaten or the other Egyptians had seen in the sky with their own eyes.

Akhenaten and the other Atenists used to worship a globe of the Sun. We can still see the globe to be coming from the sky towards the Egyptians in some ancient wall-arts in Egypt.

According to the ancient astronaut theorists, the picture depicts a strange ball coming from another world, more likely an extraterrestrial object such as a UFO or a spherical Alien Spaceship.

In the ancient Egyptian-era, before Akhenaten became the pharaoh, the Egyptians used to treat their pharaoh as a god despite knowing that they were not the avatar of God. But Akhenaten totally changed their belief system, remarking himself as the ‘Living God’.

The Bizarre Secret Behind Pharaoh Akhenaten:

Akhenaten was indeed the most different character in the Egyptian-history. His skull was longer than of any other common person, and his abdomen was outward of his body and the legs were too thin. Due to this unusual appearance, many believed he was not from this world. It was even stranger, the last part of his life was as mysterious as the Copper Scroll is today. 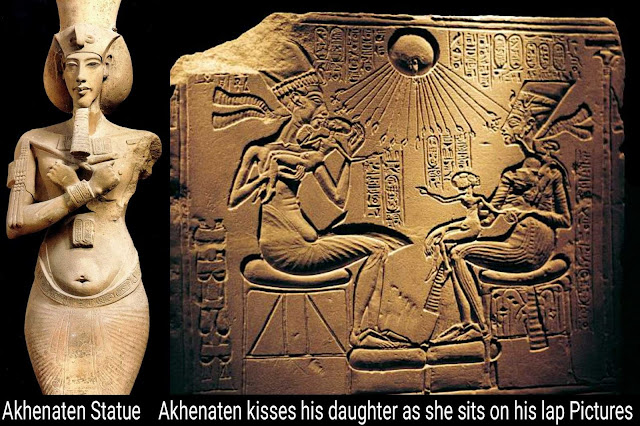 After Pharaoh Akhenaten’s death, a great effort was made by the Egyptians to completely remove his existence from Egypt-history. In this process, they had removed all the names and the inscribed pictures of Akhenaten from each and every wall of the House of God (Temple). Akhenaten was also known as “Aman-e-her-Isi”.

Mystery Behind The Tomb Of Akhenaten:

In 1932, when a British historian John Pendlebury discovered the tomb of Akhenaten, there was not a single evidence of being Akhenaten in that tomb and some believe he was buried in the Valley of the Kings. But historians recently have come to know that the presumed tomb is not of Akhenaten. Now, it seems that Pharaoh Akhenaten just vanished without leaving a trace in this world.

In fact, historians believe if his tomb is found, a large number of treasures―worth more than the discovery of Tutankhamen’s pyramid―will be discovered. In all of the Egypt-mysteries, “Where’s The Tomb Of Akhenaten” is also a significant topic and if his corpse is ever discovered then the questions could also be answered that “Did Pharaoh Akhenaten belong to this world or his origin was from some other world?”

History Of The Gods And Gold:

In the Sumerian Scripts, there are mentioned about such stories where people used to collect gold in abundance for their gods. According to those scripts, most of the human beings were created just for this job, and it is not only in the Sumerian civilization, but there are also several references to these same types of stories in various cultures from all over the world.

Whereas the fact is that they could not use any of their collected gold; and near about all the mentioned gold in those scripts later have never been found anywhere in the world. Now a series of questions arise in our mind―”Where is all the gold now? Did God take away the gold to another place such as another planet? If not, then is it still on this planet? So, where is it on Earth? What actually God used to do with these gold?”

Uses Of Gold In Advanced Technology:

Almost we all know that gold is a well conductive and useful metal which is necessary for every hi-tech and modern technology. In the present day, it’s highly used in our various electronic purposes such as phones, computers, spacecraft, etc. where there still have no other accessible substitute.

Maybe the treasures (gold) were actually used in such spacecraft and other hi-tech pieces of advanced equipment, or it was an especial deposit of the other planet-beings and was later escorted to another planet. Or maybe, the treasures of the Copper Scroll is still hidden somewhere inside the missing tomb of Akhenaten. If so, then it is not at all unreasonable to think that the treasures which would be obtained there will not be only the gold but also some more precious and valuable things that are beyond our imagination!