During the 1830s, India was partially under control of England and most of the Indian cities were completely under the British power. In this situation, Kota, which was one of the big cities of Rajasthan at the time and its surrounding area, though had an Indian King, were fully controlled by the British Officials and the king would act just like as a talking puppet.

As the residence of the officers, they had constructed a palace there in the year of 1830 and named it Brijraj Bhawan Palace. Its name depicts a significant meaning that leads “British Raj”, which literally means, “Britsh Kingdom”. While some believe that it was named after the name of India’s post-independence monarch, King Brijraj.

The Story Behind The Murders Of Burton Family In Brijraj Bhawan Palace: 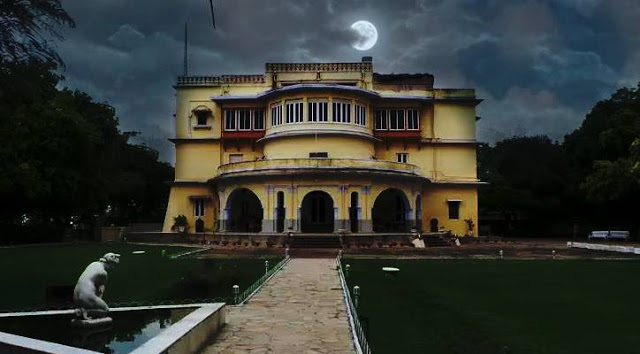 In 1844, a Major named Charles Burton was posted in Kota and he had been living there with his family till the huge outbreak of mutiny in 1857 when Major Burton was asked to travel and handle the mutiny in Neemuch, a small town located in Madhya Pradesh.

It was the first big mutiny of India against the British Power where all the big and small kingships from various places fought altogether for their freedom. Kota at that time was completely untouched by war so Major Burton thought there wouldn’t be a problem here and he decided to travel to Neemuch with his family.

But soon in December of the same year, he received a letter from the Maharaja (King) of Kota, warning him of a possible mutiny in the city. After getting the letter, Major Burton had to come back to Kota immediately to handle the intense situation.

British were already grasped in fighting with the Indian army in several locations and could not afford a new outbreak, so it was strictly order from the higher authorities to suppress the mutiny in Kota before it even started.

Major Burton immediately came back to Kota with his two little sons on December 13, 1857. But he didn’t know that the war had already caught fire beneath the silence of the city and he was walking straight into a trap.

After two days of his come-back, Major Burton saw a large party approaching the palace. At first, he assumed that Maharaja had sent these troops to pay a friendly visit. But soon, he realized the seriousness of the situation when the building was surrounded and entered by the sepoys (soldiers) with firearms, who had mutinied.

All their servants had run away before it all started, only Major Burton and his two sons remained in the palace. They took shelter in an upper room with few arms and were waiting for help to arrive from the Maharaja, while the invaders were looting the house below them.

It was already spent five hours of firing and when they understood that no one would come to help, they had to surrender, and kneeling down they said their prayers. In March 1858, Kota was retaken by the British soldiers and the body remains of Burton family were revealed and were buried in the Kota cemetery with full of military honours.

After that, Brijraj Bhawan Palace was started again to serve its purpose of British officials’ residence. Numerous big personalities including Viceroys, Kings, Queens and Prime Ministers have resided here. In 1903, Lord Curzon (the Viceroy and Governor-General of India) visited the palace, and in 1911, Queen Mary of England stayed here on her India visit.

After the Independence (achieved on 15th August 1947) of India, the palace became the private property of the Maharaja of Kota. But it was taken over by Indian Government in the 1980s and was declared as a heritage hotel. Today, besides its royal identity, it is also known as one of the most haunted destinations in India where the ghost of Major Burton still prevails.

The Ghosts Of The Brijraj Bhawan Palace Hotel:

It is said that Charles Burton’s ghost often appears to haunt the historic palace and guests have frequently complained to experience an uneasy feeling of dread inside the hotel. Hotel staff also reported that watchmen often hear a English speaking voice that says, “Don’t sleep, no smoking” followed by a sharp slap. But except these playful slaps, he doesn’t harm anybody in another way.

Actually, Major Burton was a strict military person in his life, who loved always to stay in a discipline. It seems like the ghost of Burton still patrols the palace with his disciplined and strict personality. Even, the former Maharani (Queen) of Kota once said to British Journalists in 1980 that she had seen the ghost of Major Burton several times, to roam in the same hall where he was tragically killed.

As being one of the top haunted hotels in India this royal palace could be a fascinating destination for travellers who really seek the true paranormal experience in their life.